It looks like OG wasn’t able to fluke their way through Day 2 of Midas Mode 2. 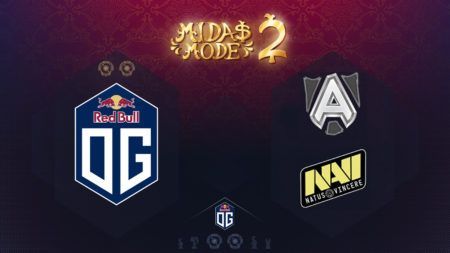 With the second day of Midas Mode 2 done, the spotlight was definitely on two-time TI champions OG.

They were set to face two legendary Dota 2 teams: TI1 champions Na’Vi and TI3 champions Alliance and, in case you missed it, here are the best parts of those two matches.

Right as game one against TI1 Na’Vi was underway, OG decided to go for “The Great Migration” bounty.

This required OG to group up and stay together at the end of the river. They then traveled all the way to the opposite end without losing a hero. They were also required to type “quack, quack, quack” into all chat to start the bounty. OG was able to complete the bounty, which secured them 250 Moonbucks.

OG’s match against TI3 Alliance also featured more hilarious moments, with Jerry “EGM” Lundkvist’s Spirit Breaker often finding himself in unfortunate situations. First, he was caught by Roshan and was bashed into oblivion.

Next, he was caught teleporting out in the open by Topias “Topson” Taavitsainen’s Pangolier. EGM tried to outrun Chaos Knight’s Chaos Bolt but OG’s heroes were ready to cut off his escape route.

After EGM was taken down, OG ran straight into the Roshan Pit where TI3 Alliance had already upgraded it to Super Roshan, which gave it more abilities, but failed to stop the OG heroes from taking him down.

Unfortunately for OG, they lost both their matches against TI1 Na’Vi and TI3 Alliance, which means they now have a 0-2 record.

Still, OG was able to show off the skins they purchased for Midas Mode 2. Their Io skin made an appearance during game three against Alliance and featured Ana’s face exploding on impact against enemy heroes.

Next was the “Green Swamp Man” Ogre Magi skin that Johan “N0tail” Sundstein purchased for US$1,250 just to troll his own coach Titouan “Sockshka” Merloz.

Midas Mode 2 continues tomorrow with Sir Sadim’s Stunners going up against OG, and then Na’Vi in the European region. After that, Anvorgesa will battle Beastcoast to close out Day 3. To watch highlights from the previous Midas Mode 2 matches, click here.

READ MORE: Here are the most hilarious moments from Day 1 of Midas Mode 2