TI9 Day 3 Group Stage results: Fnatic bounce back on Day 3 with a 2-0 win over Na’Vi

Abed and iceiceice have started showing up. 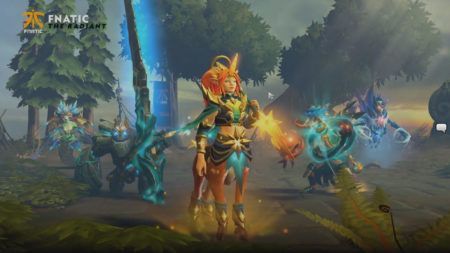 With Fnatic needing some wins after a shock loss to Peruvian squad Infamous yesterday, the Southeast Asian team had to play their hearts out against Na’Vi, who had already scored some impressive wins.

In game one, both teams traded kills early, with one skirmish seeing Fnatic offlaner Daryl Koh “iceiceice” Pei Xiang managing to survive a three-man gank. However, as the match progressed, Na’Vi’s earlier team fight composition got them into a slightly better position after the laning stage ended.

Tactical plays and Ancient Apparition’s Ice Blast Ultimate allowed Fnatic to get back into the game and build some momentum against the CIS team who had yet to get their required items to fight.

The game continued to shift in Fnatic’s favor, with pick off after pick off, and 27 minutes into the match, Na’Vi decided they had had enough and called GG.

Game two started in style, as Fnatic got off to an aggressive start with iceciceice on his signature hero, Timbersaw.

The SEA team racked up kills and even when Na’Vi looked liked they had a decent team fight, Timbersaw was there to ruin their day.

From then on, Timbersaw proved unstoppable, even when Na’Vi used all of their ultimates in an attempt to take him down.

While Abed “Abed” Azel L. Yusop’s Leshrac became Na’Vi’s punching bag, he was able to get a Black King Bar to turn things around in the later game.

Despite their lead though, Fnatic didn’t play as tactical as they did in the previous game, making a few mistakes and giving Na’Vi breathing room.

However, Fnatic decided they had had enough and pushed the high ground for all three lanes thanks to Anucha “Jabz” Jirawong’s Naga Siren illusions. With Timbersaw wrecking havoc in the backlines, Na’Vi had to tap out.