OG showed why they are last year’s TI champions in a dominating performance against RNG. 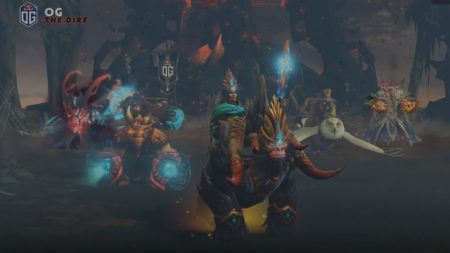 Fresh from a dominant second day at The International 2019 Group Stage, OG had nothing to lose. Chinese team Royal Never Give Up, though, had to win if they didn’t want their TI9 run to be a short one.

Unfortunately for RNG, OG was on fire, with Topias “Topson” Taavitsainen’s Invoker making plenty of plays while Anathan “Ana” Pham’s Spectre farmed up with an early six-minute Hand of Midas.

Despite RNG’s Du “Monet” Peng’s efforts at staying in the game, the aggressive OG play kept them firmly in the lead.

With OG 9,000 gold ahead by the 20-minute mark, it was all but over as Ana picked up his Radiance.

RNG continued to engage in futile fights, while OG continued to build up a lead, with a 35-12 kill score by the 28-minute mark and a 19,000 gold lead. A team fight just two minutes later secured the first game in style.

The rout continued in the second game, with OG opting to pick their comfort heroes, including Monkey King for Topson against a mid Kunkka. On RNG’s side, they went for an Alchemist on Monet, hoping to scale quickly to fight mid-game.

OG took an early lead, securing early kills with Sébastien “Ceb” Debs’s Treant Protector taking the bulk of the kills. RNG weren’t giving up without a fight though, and made a big play to kill off Topson’s Monkey King in mid.

While OG managed to get a few more kills and build a good lead, they became somewhat overconfident, letting RNG get some big kills of their own, including ganks on Ceb’s Treant Protector three times in a row. That was followed up with another kill on Topson’s Monkey King.

RNG continued to pick off Ceb every time he showed on the map, steadily building up a solid gold lead and taking control of the game. But with OG best at playing from behind, it was only a matter of time before three massive team fights broke out with OG and RNG making plays.

As OG tried to push high ground, RNG managed to hold them off. Instead of pushing it, OG decided to back off, while RNG conducted a masterful high ground defense to keep OG’s heroes away from their towers. However, a sudden team fight ended up with OG killing all of RNG’s heroes who had no buybacks and taking the series 2-0.