Can T1 continue their hot streak going into TI10? 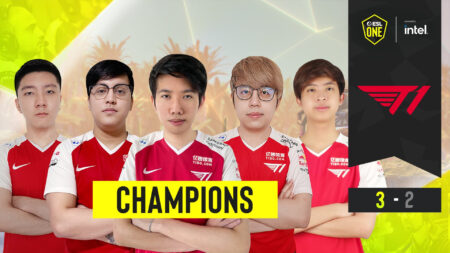 Team Captain Carlo “Kuku” Palad and his squad showed they’re in peak form during the ESL One Summer 2021 and WePlay AniMajor tournaments.

T1 displayed great resolve by defeating Virtus.pro 3-2 in the Grand Final, and took home US$175,000 in prize money for their first-place finish. This came after the team finished third at the WePlay AniMajor just a week ago.

Nuengnara “23savage” Teeramahanon has always been seen as a prodigy in the Southeast Asian region. He is now a top-tier carry player who can take over late game situations and lead his team to victory.

The 19-year-old played brilliantly during game one, especially during the hectic team fights against Virtus.pro.

23savage has matured as a player who no longer makes rookie mistakes. He finished game one with an 11/1/7 KDA with the help of exceptional Indonesian support players Kenny “Xepher” Deo and Matthew “Whitemon” Filemon.

Most team captains and shotcallers are placed in the hard support role to lessen their in-game responsibilities. Kuku has shown he isn’t like most team captains, and has continued to play the core offlane position no matter the team.

Kuku has a great understanding of which team fights are favorable for his squad. He is also amazing at setting his team up for success with timely initiation plays.

T1 has a superior understanding of patch 7.29d

The Southeast Asian squad put together an incredible game five performance by out drafting and outplaying Virtus.pro.

T1 relied on their signature heroes that they were confident with. Xepher’s Nyx Assassin was the clear difference-maker for T1, after acquiring Aghanim’s Scepter. He was able to save Karl “Karl” Baldovino’s squishy Leshrac during team fights by landing long-range Impales and Spiked Carapaces.

Virtus.pro couldn’t do anything against a burrowed Nyx Assassin because of his 50% damage reduction buff and 1.5% health and mana regen bonus.

T1 had an abundance of stuns with Xepher and Karl “Karl” Baldovino’s Leshrac. They also had complete control of team fights once you add in 23savage and Whitemon’s huge AoE Chronosphere and Chaos Offering ultimates.

Winning ESL One Summer 2021 showed that T1 are playing at a higher level right now compared to other teams going into The International 10, making them a true contender for the championship.

READ MORE: From Io carry to 1 HP TP: The 5 best OG ana plays of all time