Despite playing in the tournament with two stand-ins, OG looked as dominant as ever. 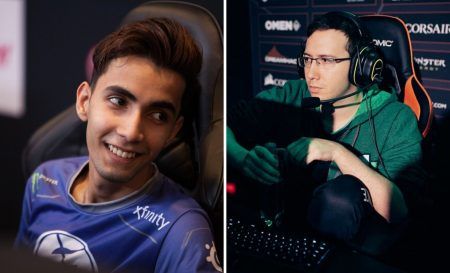 OG opened the series with strong midgame timing, led by a tri-core of Ember Spirit for SumaiL, Lycan for 33, and Brewmaster for stand-in offlaner Sébastien “Ceb” Debs. Meanwhile, Martin “Saksa” Sazdov was put on Grimstroke and Johan “N0tail” Sundstein on Keeper of the Light to back them up.

While things looked good for Nigma during the laning phase, OG took control by the midgame thanks to a relentless five-man push that their opponents simply couldn’t fight into. SumaiL notably led the way for his team by getting a 10-kill Beyond Godlike streak just 20 minutes in.

Nigma was able to strike back and take key pickoffs on OG heroes, including one on SumaiL at the 27-minute mark to snap his Beyond Godlike streak. However, OG stayed strong and won the deciding clash by the Roshan pit at the 29-minute mark to win game one after 33 minutes of non-stop action.

SumaiL notched a game-high 21 kills and 14 assists against only two deaths with his Ember Spirit to lead OG to an easy victory to start the series.

Nigma looked to bounce back in game two with a four-protect-one strategy keyed by a signature Antimage pick by Amer “Miracle-” Al-Barkawi.

OG countered their opponents’ late game strategy by going all-in on early pushing power with 33 on a core Chen, SumaiL on Gyrocopter, Ceb on Legion Commander, Saksa on a support Pugna, and N0tail on Earthshaker.

Both teams looked to be on relatively even ground after the laning phase, but OG started taking control after the 13-minute mark. Since 33 played his Chen as a core and leveled up quickly as a result, he quickly mustered up a full army of empowered creeps to fuel his team’s relentless push and even set up a huge pickoff on Miracle at the 15-minute mark.

With Nigma’s lineup still far from being in fighting shape, they did little to stop OG from securing Mega Creeps just 22 minutes in and securing the series sweep.

While SumaiL notched another game-high seven kills against just two deaths with his Gyrocopter, it was 33’s core Chen that keyed OG’s dominant showing in game two.

Both teams will continue their group stage campaigns at the ESL One Los Angeles EU-CIS online league on April 6, with OG taking on CIS team B8 and Nigma facing Cyber Legacy.