Rivalry announces the No Major No Problem online Dota 2 tournament

Dota 2 competitions will continue online amid the coronavirus pandemic. 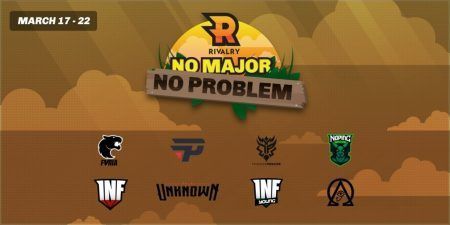 Esports betting platform, Rivalry, has partnered with organizer 4D Esports to host the No Major No Problem online tournament for South America, which will feature eight teams from the region competing for a cut of the US$5,000 prize pool from March 17-22.

The eight participating teams will be headlined by Peruvian squad Thunder Predator, one of the two South American teams that qualified for the recently-postponed ESL One Los Angeles Major.

They will be joined by Infamous, Infamous Young, Team Unknown, FURIA Esports, paiN Gaming, No Ping Esports, and Omega Gaming.

South America’s top team, Beastcoast, is notably absent from this tournament after announcing that their players will be skipping select tournaments for their own safety.

With that said, they will be competing in the upcoming WeSave! Charity Play online charity tournament.

No Major No Problem will adopt the format used for the eight-team Minor events of the Dota Pro Circuit (DPC), which splits the event between a GSL-style Group Stage and a double elimination Playoffs.

The eight participating teams will be split evenly between two groups, where each team will face the others in their group in full best-of-three matches. The two teams with the best records in each group will advance to the playoffs while the other two are eliminated.

The teams who make the playoffs will be the only ones getting a cut from the prize pool. The winners will bring home US$2,800, the runners-up will get US$1,300, the third-place team will get US$600, while the fourth-place team will have to settle for US$300.

The coronavirus pandemic continues to disrupt the global esports industry and notably ground the DPC to a halt, with the ESL One Los Angeles Major being postponed and the DOTA PIT Minor and EPICENTER Major also being canceled.