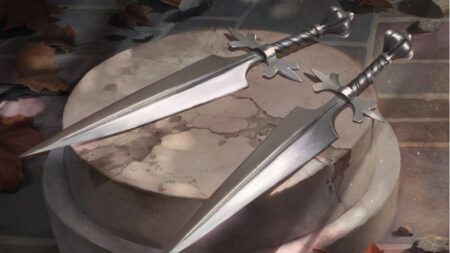 Time’s a ticking and the new patch is almost out of the oven. If you haven’t booked time off this December 15th to play the new patch and hero, now’s your last chance before you regret it!

Don’t forget to stop by our other hero prediction articles if you haven’t already:

Up until this point, most of our cases have been on humanoid characters. As for today we’ll be meeting a Kobold who could be making her way to your Dota games really soon. Yes, she’s way better than those punks in the jungle. Remember her name, she’s Debbie the cunning.

A self-taught saboteur, Debbie’s life consists of killing others in the hopes of being noticed by the Jasper Circle. A group that often participates in illegal activities. What separates this group from your everyday gang of criminals is that they carry out their missions with… professional ethics. Professional killers… yeah, that doesn’t make them sound any better, does it?

Not surprisingly, Meepo is on the Jasper Circle’s hit list because he owes them money. Yikes!

To be fair, having a name like Debbie doesn’t help if you’re trying to make it to the top of the criminal underworld. Then again, she kinda did have a choice. All Kobolds are born without names, they can only acquire the name of the first person they kill. Debbie earned her name by shoving a baker into the oven.

In her quest to join the Jasper Circle, Debbie had thought to kill one of the three great merchant kings. Sunbreeze was her target and she tracked them down day after day for six months while cooking up a plan. When she finally had one, the Veiled Sisterhood suddenly kills one of the other merchant kings, Kwerthias.

As a reminder, Phantom Assassin is part of the Veiled Sisterhood but we don’t know if she’s involved with the killing here. Funnily enough, Debbie kind of sulks because she believed all eyes would be on the Veiled Sisterhood rather than her. So instead of going ahead with her plan, she dropped it.

Clearly a killer by nature, it’d be silly not to classify Debbie as some kind of damage dealer or even disabler if she gets the chance to come over to Dota 2.

She’s a black card in Artifact so her main Dota 2 attribute isn’t given away to us peasants so easily. We can fathom a guess here and say she’ll either end up being an Intelligence or Agility hero. I just don’t see her tiny little frame and background in stealth transitioning over well if Strength was her main attribute.

It we take a second look at her portrait shot, Debbie has many tools quite literally up her sleeve. Like Riki or Clinkz, Debbie could be a brand new Agility assassin that utilizes stealth and disables to track and knock out easy targets. She isn’t afraid to get her hands dirty if need be. Not to mention she’s decked out in a lot of armor, another plus in the Agility handbook.

Let’s not forget the possibility that Debbie could also be an Intelligence hero. As cunning as she is, Debbie could benefit from a disruption based skill set that mixes silences and stuns to add confusion to team fights. Debbie will definitely have some kind of nuke to play with, it’d be wrong for her to finish a match with no kills to her name.

I didn’t really like Debbie at first but after spending some time looking at her story, Debbie quirkiness would fit perfectly into Dota’s roster of heroes. Another assassin type hero is just what we need after the influx of tanky team fighters like Pangolier and Mars, and powerful spellcasters such as Snapfire and Void Spirit. We need a little something, and Debbie might just be it.