The clash between the leaders of Group B ended in a stalemate. 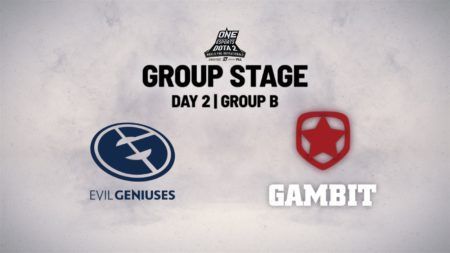 The clash between the top two teams in Group B saw Gambit Esports taking on Evil Geniuses, with each team walking away with one game.

Game one saw a return of Cliffeezy as Artour “Arteezy” Babaev’s Bloodseeker discovered a cliff near the Roshan pit high grounds, which actually saved his life as he was hunted by three of Gambit’s members.

The rest of EG responded speedily and initiated a clash which resulted in a two for one trade in favor of the American squad.

Roman “Ramzes” Kushnarev’s Dark Seer and Tal “Fly” Aizik’s Disruptor was able to create a beautiful combo in the middle of the game — a Vacuum-Wall, Kinetic Field-Static Storm ability combination.

EG eventually took the first game of the series after 39 minutes with a 22,000 gold lead.

Gambit Esports took an early lead in game two, winning several team fights to put themselves in a commanding position.

Evil Geniuses knew that they had to prevent Gambit from taking more buffs, so they stole the Aegis of the Immortal using Abed “Abed” Yusop’s Storm Spirit.

However, it wasn’t enough to stop Gambit, as the CIS team raced away with a 31,000 gold lead, ending EG’s win streak, and tying up the series 1-1.

With their one point from the series, Evil Geniuses are guaranteed a spot in the Main Event Upper Bracket. Gambit currently sit in second place and will need at least one win from their match against PSG.LGD to guarantee an Upper Bracket spot.