A crazy come from behind win secured OG Seed’s spot in the Grand Final where they’ll face Fnatic. 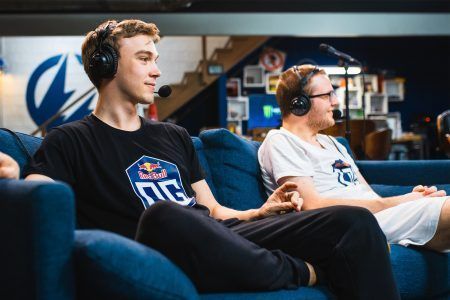 Surging European squad, OG Seed, came from behind to win games two and three of their Lower Bracket Final match against North American powerhouse squad, Evil Geniuses, for a spot in the Grand Final where they’ll face Fnatic.

In the third game of the series, OG Seed found themselves on the brink of elimination after Omar “Madara” Dabachach’s’ Terrorblade lost his Divine Rapier to Abed “Abed” Yusop’s Storm Spirit.

OG Seed then lost all five of their heroes after EG prevented Madara from using his Sunder ultimate on any of their heroes. Andreas “Cr1t-” Nielsen also rained fire on OG Seed’s heroes with a stolen Mortimer’s Kisses ultimate.

EG’s team immediately ran into the Dire base in an attempt to finish the game, but OG Seed used four buybacks and somehow managed to defend their base.

Abed then jumped into three Dire heroes and controlled them with an Aghanim’s Scepter Electric Vortex, but EG’s heroes were unable to followup and this gave Madara the opportunity to reclaim his Divine Rapier.

With EG’s major damage dealers out of the picture, OG Seed ran into the Radiant base and targeted the Ancient. EG used their Glyph and Repair Kits, hoping to delay OG Seed’s push, but it was to no avail.

With their 2-1 series win, OG Seed advances to the Grand Final to face Fnatic in a best-of-five match.

Meanwhile, Evil Geniuses end their Dota Summit 12 campaign in third place and earned US$35,500 for their efforts.