Alliance’s new roster notch their first match victory on the back of a dominant showing against Liquid. 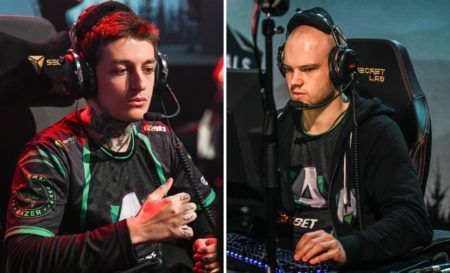 Both teams took turns stomping each other in the first two games of the series to force it to a deciding game three. Alliance looked to close things out with a strong tri-core of Wraith King for Nikobaby, Death Prophet for Limmp, Mars for new team captain Gustav “s4” Magnusson, Rubick for Simon “Handsken” Haag, and Winter Wyvern for stand-in support player Andreas Per “Xibbe” Ragnemalm.

Liquid opted for a tri-core of their own, but with an unusual composition with Michael “miCKe” Vu on a carry Slardar, Maximilian “qojqva” Bröcker on a mid Razor, Samuel “Boxi” Svahn on Pangolier, Tommy “Taiga” Le on Enigma, and Aydin “iNSaNiA” Sarkohi on Ancient Apparition.

Alliance got off to a roaring start, as Nikobaby enjoyed virtually uncontested free farm while Limmp dominated the early engagements and bagged two Triple Kills in team fights at the 16 and 19-minute marks.

While Liquid was still showing signs of life heading into the midgame, the space created by Limmp’s dominance in the early fights allowed Nikobaby to have Radiance, Blink Dagger, and Assault Cuirass just 24 minutes in. Alliance’s carry was able to get a Triple Kill for himself before leading his team to force the GG call from Liquid after 28 minutes and winning the series, 2-1.

Limmp notched a game-high 11 kills while Nikobaby had 8 of his own to lead their team’s new roster to their first match victory.

With their win, Alliance improve to a 1-1 record while Liquid slump to a 0-2 line.

Both teams will continue their group stage campaigns at the ESL One Los Angeles EU-CIS online regional league on April 9, with Alliance taking on Team Unique and Liquid facing off against Team Spirit.

READ MORE: Miracle and w33 lead Nigma to a hard-fought 2-1 over Cyber Legacy