You can now queue for each of the five roles separately in the new update. 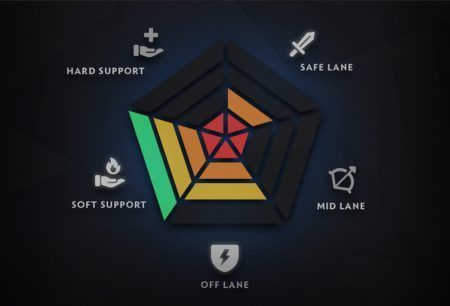 The latest matchmaking update to Dota 2 has dropped, replacing the previous Core/Support MMR separation with a new system that uses a single rank that accounts for each of the game’s five roles.

The new singular rank system will have separate handicaps for the safelane, midlane, offlane, soft support, and hard support roles, which will represent a player’s relative strength when playing a particular position.

Instead of queueing to play either as a Core or a Support as before, players will now have to queue up for a particular position, with the matchmaker making adjustments depending on a player’s strength in whichever role they choose.

In other words, if you play at your best as a midlaner and safelane carry then queuing up for those roles will match you with players that are at your skill level.

Queuing up to play as the offlaner or either support roles will match you with relatively weaker players to account for the skill difference for your weaker roles and your stronger ones.

The new system will also display the adjusted badge levels that were used to match each player for their role.

Winning or losing ranked games will modify a player’s actual MMR, regardless of which role they queue for.

“This change will help the matchmaker better account for a player’s different performance levels between various roles,” said Valve in the blog post announcing the new changes.

The initial MMR values for each role in the new system will be calculated based on a player’s previous Core/Support MMR values and analysis of their past 100 games. Players can track their current role adjustments under the new system in the Role Queue menu.

The previous Core/Support MMR separation was introduced in the first major matchmaking update for Dota 2 in August last year. Since then, Valve has been periodically releasing updates to improve Dota 2’s matchmaking experience.