Make hay while the sun shines. 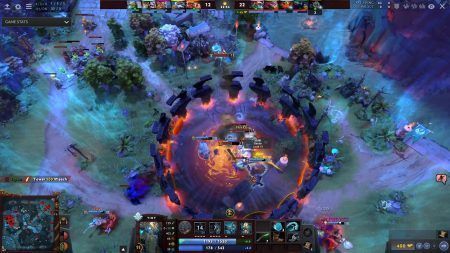 MS Chonburi has won the Thailand Open Qualifiers for the ONE Esports Jakarta Invitational.

In the grand finals, MS Chonburi off against Unknown in a best-of-three match for a spot at the Kuala Lumpur Regional Qualifiers.

Game one saw MS Chonburi pick Troll Warlord for Japan and Meepo for Nikko. The pair carried their team, going 6/0/10 and 7/2/10 respectively.

Unknown’s comp of Outworld Devourer and Juggernaut had no answer to the Meepo, and they had to concede at the 21-minute mark.

In game two, MS Chonburi banned Meepo at the last pick, perhaps worried that Unknown would turn the tables on them.

Instead, MS Chonburi opted for a Spectre, Pangolier, and Mars combo, while Unknown picked up Snapfire, Troll Warlord, and Alchemist.

Unknown were obviously hoping to win the game before Chonburi could get their late-game Spectre online, but unfortunately, that did not happen, as Nikko’s Pangolier ended up wreaking havoc, finishing the game 8/1/15.

Once Japan’s Spectre picked up a Diffusal Blade and a Manta Style it was all over, with MS Chonburi closing out the game in just 24 minutes with a 28-12 score.

MS Chonburi has now qualified for the Kuala Lumpur Regional Qualifiers, which will take place on March 7-8 at the Sunway Pyramid in Kuala Lumpur.