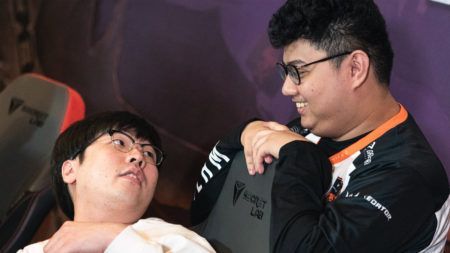 MDL Chengdu Major’s Playoff Stage kicked-off today, and the first Upper Bracket Quarterfinal match was between the undefeated TNC Predator team versus a surging Alliance squad. Here’s how it all unfolded:

Right at the start of the series, Alliance took it to their opponents and used the Southeast Asian squad’s Night Stalker strategy against them. Alliance continuously put the pressure on TNC.

After building a significant gold and level lead, Alliance outmaneuvered their opponents, with TNC often being caught isolated and picked off one-by-one.

Alliance amassed a massive 62,000 gold lead against TNC, but this wasn’t enough for them to finish the game. TNC defended their Ancient against Alliance’s heroes and Mega Creeps.

Eventually, TNC ran out of Glyphs and buybacks which gave Alliance the opportunity to finally take down the Radiant Ancient and win game one.

The second game saw TNC giving Alliance the Night Stalker during the drafting phase again. But, this time, they took a Naga Siren off-lane pick on Damien “kpii” Chok that caught Alliance off-guard.

TNC had a much better laning phase in the following game, with Armel “Armel” Tabios taking the top spot on the net worth chart. TNC was able to eliminate targets much faster compared to Alliance, and this made all the difference during team fights.

With an Orchid Malevolence and Nullifier on Armel, Alliance’s cores couldn’t do anything against their opponents and TNC finished game two at the 36-minute mark.

Early into game three, Alliance was able to capitalize on how TNC over-extended after claiming Roshan. Kim “Gabbi” Villafuetre’s teammates tried to bail him out but this led to a full team-wipe for Alliance.

But, TNC bounced back and once Gabbi had a Black King Bar ready, Alliance couldn’t find any openings against their opponents. Park “March” Tae-won landed an impressive Reverse Polarity against two Alliance heroes despite not having a Blink Dagger.

Gabbi then destroyed Alliance’s heroes who were on the full retreat. He even dove past Dire Tier 4 towers to eliminate Alliance’s low-health point support heroes.

With their backs against the wall, Alliance tried to prevent TNC from claiming Roshan. This left them exposed for TNC to take down. Gabbi was easily doing 1,300 points of damage on critical hits and this was enough for Alliance to tap out of the series.

TNC Predator has secured themselves at least a Top 6 finish at the Chengdu Major after defeating Alliance 2-1.

Meanwhile, Alliance now drops to the Lower Bracket where they await the winner of Team Aster versus Gambit Esports.