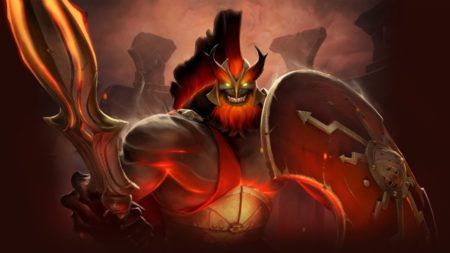 Dota 2’s Mars was finally added to Captain’s Mode in the 7.22 patch and the hero made a splashy first appearance at ESL One Birmingham.

His ultimate, Arena of Blood, which locks down an area, gave Chinese squad Vici Gaming a clear advantage whenever Team Liquid tried to push the high ground, but it just wasn’t enough, as Team Liquid outplayed VG to tie-up the series 1-1. The hero also ended the day with just two wins and six losses among all the games played.

That said, Liquid also managed to score some firsts, such as getting the first-ever Aghanim’s Scepter consumable item from Roshan after a great team fight that saw VG fail to kill off Liquid’s carry, Lasse Aukusti “Matumbaman” Urpalainen on Troll Warlord.

Mars continued to be an annoyance for Liquid, providing enough high-ground to prevent Liquid from claiming the mid-lane barracks.

The scene continued to repeat itself as Mars’ ultimate along with Warlock’s area-of-effect slow from the Chaotic Offering skill allowed them to repel Liquid.

With the Chinese squad’s base successfully defended, VG stalked Team Liquid’s heroes by the Roshan Pit and won a crucial team fight.

VG thought they had the game in hand since only Amer “Miracle” al-Barkawi and Kuro “Kuroky” Takhasomi were left to defend the Radiant Ancient. But Liquid’s Maroun “Gh” Merhej’s Shadow Shaman manages to catch out VG’s Zhang “” Chengjun as VG were retreating and kills him off.

With the game on the line, Ivan “MinD_ContRoL” Ivanov’s Earthshaker went to work, constantly stunning multiple VG heroes, giving Miracle enough space to take out Dire Ancient while VG heroes were battling far away from their base.