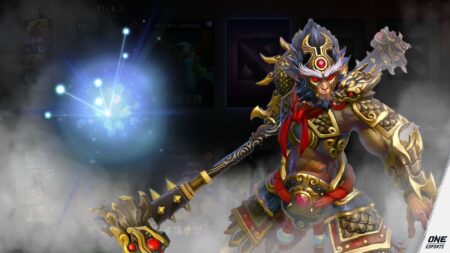 The International is Dota 2’s biggest tournament. 18 teams from all over the world compete for a slice of the US$40 million prize. The tournament began on October 7, and already certain trends have emerged.

While Tidehunter leads the way as the most picked hero at TI10, Io and Monkey King have been the two most heavily contested so far. In fact, both heroes have been picked or banned in every game.

Even though these two heroes are popular, teams showed very different reasons for picking them.

Why has Io been heavily contested in every game at The International?

Io being heavily contested is a familiar pattern at The International. In fact, it is the most banned hero historically at the event.

The reason Io has always been such a value pick is due to the hero’s ability to provide a global presence around the map, save allies, and provide a strong steroid for the cores.

With Dota 2 patch 7.30d emphasizing early and mid game team fights, Io’s ability to relocate with a friend gives the team a high probability of winning skirmishes across the map.

One of the unique things that have emerged at TI10 is how much teams are focusing on buffing ally cores. Lycan has shot up in popularity due to his Wolf Bite ability, and Solar Crest is also showing up in almost every game.

Io is able to provide a huge amount of sustain and bonus damage for its Tether ally. The hero also doesn’t need farm to provide such strong buffs (although farm always helps of course).

Not to mention, this hero is surprisingly difficult to kill, as Arif “MSS” Anwar showed in game two of their group stage match between Quincy Crew and PSG.LGD.

Why has Monkey King been heavily contested at The International?

Monkey King is a hero that rises and falls with the Dota 2 meta. In certain patches such as 7.29, the hero was almost completely ignored. For example, during the WePlay AniMajor, Monkey King only appeared in nine games during the entire tournament.

Luckily for Monkey King, the current patch heavily favors his toolkit. Dota 2 patch 7.30d nerfed the stack meta, which allows active cores like the Monkey King and Tiny to shine.

Monkey King is highly mobile due to Tree Dance. This allows him to quickly help his team in a pinch, and go back to farming without wasting any time. Topias Miikka “Topson” Taavitsainen used this mobility to great effect in the group stage match between OG and Thunder Predator in game one.

Monkey King’s Wukong Command provides the hero with a strong team fight presence, and he can set up his ultimate near an important objective, such as barracks or Roshan, to help his team secure it.

So far at TI10 both of these heroes have made an appearance in every game as either a pick or a ban. It’s likely both heroes will maintain a strong presence throughout the tournament.

But which hero might a team let up first?

A strong case can be made for either hero, however, it is more likely that teams will favor Monkey King over the Io if given the chance.

Monkey King’s versatility allows him to be played in multiple roles, and provide tremendous value in each. BOOM Esports’ Timothy John “Tims” Randrup for instance, demonstrated the strength of Monkey King support in the recent BTS Pro Series Season 8.