Are there other heroes that belong on the list? 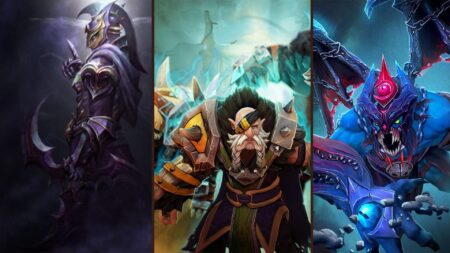 Pubs in Dota 2, or any team-based game can be a frustrating experience. To grind MMR in Dota 2 patch 7.30d, players need to be patient, consistent, and open to improvement.

Particularly when a new patch drops, everyone scrambles to try to figure out which heroes are the best to pick.

The latest Dota 2 patch 7.30d update aims to balance the game and make as many heroes viable for The International as possible. However, even with the balance changes, some heroes have emerged as premiere picks to grind MMR with.

The current patch prioritizes mid-game team fights above all else. Using heroes that can come online quickly and fight with their team to secure objectives are the fastest way to grind MMR.

The best hero in each role to grind MMR in Dota 2 patch 7.30d

It seems that no matter the patch meta or how many nerfs he gets, Lycan will remains a great core pick for any role, especially as a carry.

Lycan continues the trend of being the Dota 2 hero with the highest win rate at Divine and above, for his strengths are unprecedented.

Lycan can self-sustain in lane thanks to Feral Impulse, making harassing him nearly pointless. Lycan also wins most trades as his wolves deal extra damage.

During the midgame, Helm of the Overlord, and Shapeshift allow him to quickly bring down supports in team fights. What’s more, Lycan’s Howl provides a lot of value in physical-heavy lineups due to its armor reduction.

While Lycan was hit with a few nerfs, he maintains his spot as the best hero to grind MMR with in Dota 2 patch 7.30d. There simply isn’t any other carry that provides as much value as Lycan.

Similar to Lycan, Lone Druid is effective in any core role, but the highest win rate is reached when he is picked mid.

Lone Druid is a monster in the lane thanks to Spirit Bear. Spirit Bear allows the hero to control creeps better than anyone else. The bear is extremely tanky, and makes any attempt to kill Lone Druid futile.

Lone Druid comes online early in the game, for he only needs a Mask of Madness to start eating enemies for breakfast. Lone Druid is also the best scaling hero late-game, for he has a total of 12 item slots.

Lone Druid has been receiving buffs for the last five updates and it shows. The hero attacks faster, has a higher proc on Entangling Root, and his bear is tankier as well in Dota 2 patch 7.30d. All these buffs have made Lone Druid one of the best to grind MMR.

While Night Stalker has always been a stable pick in the offlane, the meta shift to mid-game team fights is the main reason why he’s great to grind MMR with in Dota 2 patch 7.30d.

Night Stalker provides a lot for his team, for he is durable and provides unobstructed vision while having free pathing for himself. Night Stalker can also silence multiple enemies, and loves to jump the enemy’s backline.

Night Stalker is a solid laner thanks to his high base regeneration, allowing him to secure last hits with Void in difficult matchups. Essentially, his first power spike at the five-minute mark allows the hero to control the tempo of the game.

If his team needs more damage then Aghanims is a great option. Overall, Night Stalker’s item build is flexible and can adapt to the needs of the game in Dota 2 patch 7.30d.

Vengeful Spirit is an unorthodox soft support. The hero was previously played as hard support whose main job is to sacrifice her life to save more important members of the team.

All that has changed now thanks to the Aghanim Scepter upgrade for Vengeful Spirit.

Vengeful Spirit got a new Aghanim upgrade in patch 7.28, which allows her to to spawn an illusion of herself upon dying. The Illusion moves faster, can use all of Vengeful Spirit’s abilities, and even grants her experience when dead.

This second life has allowed Vengeful Spirit to continue being useful after dying. Killing Vengeful Spirit twice is a hassle, for it requires enemies to spend time and spells to bring her down when there are more important threats to focus on.

Another part of Vengeful Spirit’s strength is the buff to Nether Swap. It now provides 50% damage reduction at max level for both Vengeful Spirit and any ally it is used for.

While Vengeful Spirit isn’t the best laner in the game, her sheer durability and ability to save allies have made her one of the best heroes to grind MMR in Dota 2 patch 7.30d.

Dota 2 patch 7.30d prioritizes the laning stage and mid-game team fights. Due to the nerf to the stack meta, active carries are more popular, for games are being decided earlier.

In such situations, Silencer has emerged as the best hard support grind MMR with. Silencer is an absolute nightmare to play against during the laning stage, for he deals pure ranged damage that doesn’t aggro the creeps. This allows Silencer to harass enemies with no repercussions.

Additionally, Silencer is able to heavily punish enemies for casting spells. Arcane Curse lasts longer each time an enemy casts a spell while it is active.

Meanwhile, Last Word silences enemies after they use a spell or four seconds. Since Arcane Curse deals 1.7x damage and slows silenced enemies, this gives Silencer an easy two-hit combo.

Silencer’s Global Silence is a fantastic ultimate for team fights. It prevents all enemies from using spells for a few seconds, and doesn’t need to be aimed.

Silencer has too much going on for him right now. The hero deals incredible AoE damage, has multiple silences at his disposal, steals enemy intelligence, and scales well into the late game.

So far, Silencer’s only weakness is enemy dispels, but by that time, he would have provided enough for his team to win the game.

Who do you think are the best heroes to grind MMR for each role in Dota 2 patch 7.30d?