CIS teams Virtus.pro and HellRaisers have qualified for the Dota Summit 11 Minor

VP dominated the Dota Summit 11 CIS qualifier with a clean sweep of all their matches. 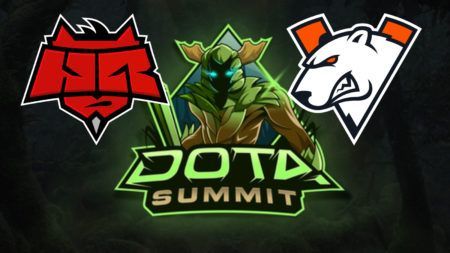 Both Virtus.pro (VP) and HellRaisers have secured spots for the Dota Summit 11 Minor, which is set to take place on November 7-10 in Los Angeles, California.

Virtus.pro was the first CIS team to punch their ticket to the Minor by defeating Old but Gold (gOLD) 2-0 during the semi-finals. Then, they defeated jfshfh178 (178) in the upper bracket finals.

VP neutralized 178’s Meepo pick when they drafted a heal-oriented team with Necrophos, Omniknight, and Chen in game 1.

Hot on the heels of Virtus.pro came HellRaisers. After a devastating 2-0 loss to 178, HellRaisers bounced back and defeated gOLD 2-0 in the first round of the lower bracket.

This led to a rematch between HellRaisers and 178, where HellRaisers avenged their semi-finals loss with a 3-0 sweep in the lower bracket finals.

Virtus.pro’s previous roster was ranked second overall during the last DPC season. But because of the whole Dota 2 roster shakeup, VP has found themselves working their way back up.

The organization currently has both Egor “epileptick1d” Grigorenko and Vitalie “Save-” Melnic on trial periods with the team. With seasoned Dota 2 veterans Vladimir “No[o]ne” Minenko, Roman “Resolut1ion” Fominok, and Alexei “Solo” Berezin on their current roster, VP will be aiming for immediate results as soon as the new 2019-2020 DPC season kicks off.

Meanwhile, HellRaisers’ decision to return to Dota 2 seems to have paid off with the team’s entry to Dota Summit 11. HellRaisers is led by Dota 2 veteran Ilya “ALOHADANCE” Korobkin, together with Alik “V-Tune” Vorobey, Alexander “Nix” Levin, Dmitry “DM” Dorokhin, and Yaroslav “Miposhka” Naidenov”.