The North American org has taken South America’s best team under their wing. 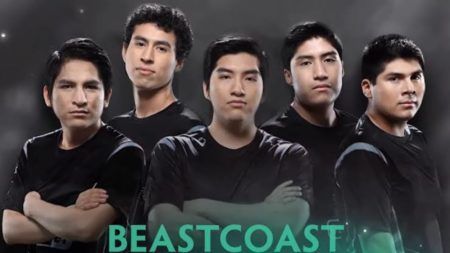 Team Anvorgesa, then playing under the Infamous banner, surprised many back in TI9 when they became the first South American team to place in the Top 8 of TI. They defeated more favored teams like Keen Gaming and Newbee in the process.

Hector Antonio “K1 Hector” Rodriguez, Jean Pierre “Chris Luck” Gonzales, and Elvis “Scofield” De la Cruz Peña in particular stood out for the team, as they embodied an aggressive, yet methodical, style of play that has yet to be seen from other South American teams.

“Anvorgesa caught my eye at TI9 before they even stepped on to the stage,” said Beastcoast CEO Grant Zinn in a statement.

“Their growth as a team over the last DPC season and their will to win are all things that we as an organization want to promote. This was a natural fit, and we are excited to make waves with them this season!”

The North American squad also had good words to say about the South America’s Dota 2 talent — even calling the region “the future of competitive Dota.”

The Anvorgesa side, meanwhile, is quick to reciprocate the enthusiasm for their new affiliation.

“I am very happy to start this DPC road towards TI10, together with an organization with which we share the passion for competitiveness,” added captain Steven “Stinger” Vargas.

“I hope we have a lot of fun along the way — learning and achieving the goals with the waves of Beastcoast.”

The new Beastcoast roster will make their debut in the South American qualifiers for the MDL Chengdu Major, which runs from October 5-10.