A resurgent Alliance take down Gambit to force a rematch with Aster in the Grand Finals. 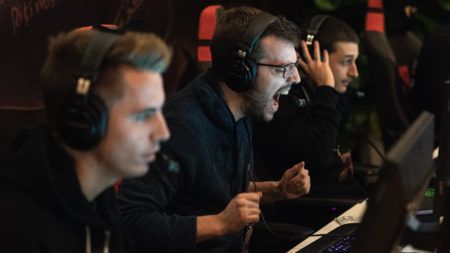 Alliance prevailed over Gambit Esports in a 66-minute, back-and-forth thriller in game one of the Lower Bracket Finals of the StarLadder ImbaTV Kyiv Minor 2020. The gritty win set the stage for a 2-0 sweep for the European team to advance to the Grand Finals, where Team Aster is already waiting.

Alliance opened the series with a strong, midgame-focused tri-core of a safelane Dragon Knight for Nikolay “Nikobaby” Nikolov, Death Prophet for Linus “Limmp” Blomdin, and Timbersaw for Neta “33” Shapira.

Meanwhile, Gambit pinned their hopes on a four-protect-one strategy headlined by Sniper for Danil “gpk” Skutin, with Kiyalbek “dream`” Tayirov on a safelane Ember Spirit and Maxim “Shachlo” Abramovskikh on Nature’s Prophet to back him up.

Alliance’s strong midgame composition looked like it could have ended the game early, but Gambit was able to stall their offensive long enough for gpk’s Sniper to come online. In a huge fight for Roshan at the 32-minute mark, Gambit expertly outmaneuvered Alliance and kill all three of their cores to secure the Aegis for gpk.

With gpk’s huge damage output paired with a second life, Gambit felt confident enough to push up their opponent’s base from the bottom lane. That ended in disaster as Alliance won the ensuing fight by their doorstep and take down gpk twice, securing them almost full map control.

With Gambit on the ropes, gpk acquired a Divine Rapier at the 53-minute mark to put his team on his back. Despite facing down a deficit of almost 30,000 gold, Gambit was able to repel Alliance’s relentless assaults and even secure another Aegis for their carry thanks to gpk’s insane damage output.

In a huge clash by the river at the 61-minute mark, Alliance virtually threw bodies at gpk then used a flurry of buybacks to take him down twice and look poised to finally take the game.

However, Gambit repelled the ensuing push by Alliance even without gpk’s Rapier and took down Nikobaby without buyback. That opened a huge window of opportunity for Gambit to take the fight to Alliance’s base to try and steal the win.

With their Ancient being exposed and despite being down one of their cores against the full Gambit lineup, Limmp and 33 somehow isolated gpk and dream — both without buyback — to win the decisive clash of the game. After a grueling 66 minutes, Alliance finally forced the GG call from Gambit to win the first game of the series.

33 was arguably the most valuable player of the game for Alliance, as his Timbersaw was crucial in tanking through and mitigating gpk’s damage output as well as isolating him long enough to be taken down in fights. He finished with an excellent 14-4-13 KDA to lead his team to a much-needed win.

The disheartening loss seemed to have taken the wind out of Gambit’s sails, as they didn’t put up much of a fight in game two. Alliance cruised to a 36-minute victory with a 36-10 kill advantage to secure the sweep and a rematch with Aster in the Grand Finals.

Gambit bowed out of the Kyiv Minor with a respectable third place finish, with US$54,000 and 110 Dota Pro Circuit points in consolation.