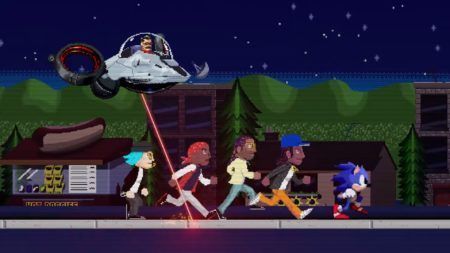 “Speed Me Up” features Wiz playing the original Sonic the Hedgehog on his Sega Genesis (a.k.a Sega Megadrive) and enter the 16-bit universe along with his fellow rappers through a golden ring that comes out of the screen.

Wiz and his friends run through several classic Sonic levels, until they’re chased off at the end by Dr. Robotnik.

The song features four-on-the-floor, chiptune drums made famous through retro games like Sonic while the featured rappers spit bars chock-full of Sonic references.

We hear Wiz boast his success with the line, “rings of gold and awards all on my nightstand” while Yachty talks about how the “ladies love my spin” and how Tails is his best friend. With the nice mix of trap and mumble rap elements, the song simultaneously shines as an ode of classic video games and modern music.

You can check out the official video down below:

The Sonic the Hedgehog movie will be released in cinemas on February 20.

READ MORE: The new Sonic The Hedgehog trailer shows what happens when studios listen to fans