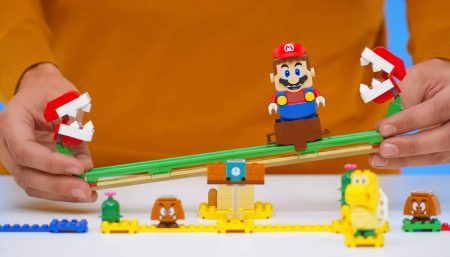 A new adventure awaits Nintendo and Lego fans as the two companies have unveiled the first three sets for its unique and interactive toy Lego Super Mario.

The real star of the set is the battery-powered Lego Super Mario. Mario can display different emotions through the LCD screens in his eyes, mouth, and belly combined with his built-in speaker. He can also virtually collect coins throughout the course, allowing you to recreate the iconic 1985 NES platformer.

With over 231 Lego pieces included in the kit, fans will surely have a fun time building and playing this Mario Starter Course.

The other two courses are expansion sets that let you add to your course.

Mario will be sliding in between two hungry Venus flytraps in the Piranha Plant Power Slide Expansion Set. The turtle-like Koopa Troopa is also present in this kit.

On the other hand, the fire-breathing evil giant King Koopa lies ahead in the Bowser’s Castle Boss Battle Expansion Set. Bowser is accompanied by some of our favorite Mushroom Kingdom villains like Dry Bones and Boo.

All three sets will be released worldwide on August 1.