Now all they need is their own Cuilein-Anbar. With its massive rainforests and numerous lakes, Genshin Impact’s Dendro region, Sumeru, spans far and wide. It’s easy to get lost in the woods, especially for travelers who are new to the area.

It’s a good thing Sumeru’s finest forest rangers, Tighnari and Collei, patrol around the region. If you happen to find your way around Avidya Forest, there’s a great chance you’ll spot the 4-star Dendro archer and trainee ranger, Collei.

This damage-dealer is recognized for her enthusiastic attitude and helpful nature, especially around her hometown in Gandharva Ville.

This Collei cosplayer is Sumeru-ready 源源 released their charming photos in Collei cosplay, just in time for the release of the Sumeru patch.

They turned heads around in the character’s black dress, thigh-high stockings, and bright green wig. Paying close attention to the costume’s details, their brooch, earring, hair ornament, and Dendro vision sparkled vividly in the photos. 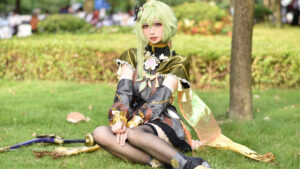 Instead of the featured 5-star bow, Hunter’s Path, the cosplayer carried around a replica of the Hamayumi bow, forged in the Inazuma region.

Fans can follow 源源 on her BBS miHoYo page. BBS miHoYo is a web forum and the equivalent of HoYoLAB in China.

Collei is one of the main characters of the Genshin Impact manga, which unravels how she became close friends with Mondstadt’s 4-star Pyro archer, Amber. The two share plenty of similarities in their combat dolls, catchphrases, and hobbies.

You can get this 4-star for free during the Graven Innocence event.