And four other must-see plays from the tournament. 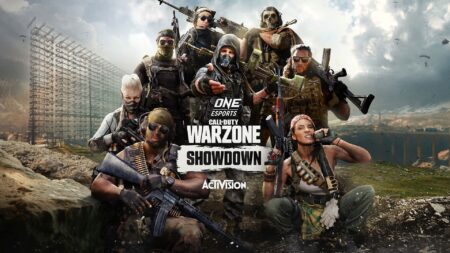 The ONE Esports Warzone Showdown was filled with stellar performances from all eight of the talented streamers. Whether it was taking longshots or getting up close with an SMG, these standout operators show what it’s like to stay frosty in the city of Verdansk.

Here are the five best plays from the ONE Esports Warzone Showdown.

5. Myrtle Sarrosa guns down a helicopter

When it comes to high-adrenaline power plays, Myrtle Sarrosa knows how to channel her inner Rambo and deliver some bullet-heavy action.

Perched up on the side of the chopper, the streamer spotted their bounty target parachuting down and hightailing with a helicopter. In the chase across the Verdansk skyline, Myrtle gunned the flying target down with ease, grabbing a Longshot (71.27m), a team wipe, and a contract completion all in one go.

4. Maggiekarp slides in to claim the team wipe

Maggiekarp was another streamer that wowed the Warzone Showdown crowd with her pinpoint ground coverage.

After a hot drop into the Verdansk Train Station, Maggiekarp followed up on a scouting teammate’s perfect enemy ping. Despite having no vision of the opponent, Maggie crouch-slid through two doors and unleashed a barrage of bullets onto the attacker, claiming a savior kill and a team wipe.

After spotting a few campers on a rooftop, Alodia jumped off her team’s chopper and thirsted an opponent who took a few helicopter blades to the face.

Rotating around the rooftop, her Tracker perk picked up the footsteps of another opponent in the vicinity. With the enemy distracted by the helicopter, Alodia swung hard from the corner and got the perfect spray for the double elimination.

In any firefight, Ashley Gosiengfiao is a long-range killer with her AX-50 sniper rifle.

Taking position behind a loadout drop, Ashley added to the mayhem by emptying out a clip of her AR on an incoming Big Bertha truck. Once the opponents stepped out of the vehicle, Ashley pulled out her AX-50 and immediately beamed one of the stray targets for an assist.

With only one opponent left on the field, Team Ashley cornered the player down and grabbed the Warzone victory with a flashy airstrike.

1. Alita Zunic is the ultimate squadmate in Warzone Showdown

Alita Zunic has proven how good of a teammate she is during the Warzone Showdown’s most intense engagements.

Jumping out of her Big Bertha truck, Alita quickly came to the aid of her downed teammate. As he pinged the location of the enemy, Alita immediately aimed down and avenged him with the perfect snipe.

Instead of celebrating the massive frag, Alita runs back, revives her fallen ally, throws some cash down for the Buy Station, and goes back to piloting Big Bertha. What more can you ask from a teammate?

READ MORE: Maggiekarp: ‘I want to bait my teammate’