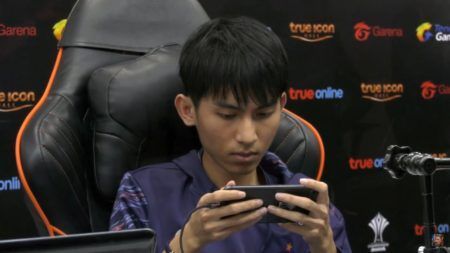 The Quarterfinals round of the Arena of Valor International Championship 2019 has concluded, leaving just four teams left in the tournament for AoV’s biggest prize.

The first two matches went in favor of Japanese team Unsold Stuff Gaming. USD started strong with great drafting and clean map rotation. They dominated the first game with 17-3 team kills against IGP in a span of 13 minutes.

In the second game, USG continued to dominate and ended the match after one solid clash that team wiped IGP. The final team kill was 8-3.

However, in game three and four, IGP bounced back, thanks to strong play by Turtle, who notched up more than half of IGP’s total kills with his insane jungling skills.

USG took a closely contested game five that ended with a team score of 14-13.

However, IGP tied up the series, taking game six, and then closed out game seven to take the match 4-3.

Turtle’s outstanding numbers in kill participation earned him the key player of the game in the third, fourth, and sixth matches.

Perhaps the most-awaited series of the AIC 2019 Quarterfinals was between Vietnamese team, Team Flash, and Taiwanese team, ahq e-Sports Club.

Within just 12 minutes, Team Flash had ahq in the palm of their hands as they ended the first game with a total of six team kills against one.

However, with Kim”HAK” Do-Yeop’s Raz by their side, ahq was able to take game two with a total of 12-4 team kills with Phạm “Gấu” Hồng Quân’s Omen as the key player of the game.

Team Flash answered back and came out stronger with a 10,000 gold lead and seven towers destroyed in the third game.

The back and forth continued as ahq game four, with Methus “Nt” Meechom’s Elsu putting in an exceptional performance with a 72.7% kill participation.

However Team Flash raised their game to another level, dominating the fifth and sixth matches of the series to take a 4-2 overall victory. Jungler Trần “ADC” Đức Chiến was the MVP of both games, with over 70% kill participation using Zephys and Fennik.

Hometown favorites Buriram United Esports put up a good show for the local crowd as they took down Indonesian team, EVOS Esports.

The Thailand team got off to a great start in game one, racing out to a 14-4 team kill lead and destroying almost all of EVOS’ towers except for the top outer tower in the 11-minute game.

This was immediately followed by another flawless win as the team demolished all nine towers this time, with Overfly’s Yena owning half of the team’s kill in the second game.

However, BUE quickly ended EVOS’ hopes as they prevailed over the fourth and fifth matches. Game five turned into a slugfest, lasting 28 minutes, in total as EVOS Esports’ refused to go down and displayed stellar defense. However, BUE were finally able to overwhelm them to take the series win 4-1.

The last match of the Quarterfinals saw ONE Team take on Hong Kong Attitude.

The first game was a pretty close fight between the two groups, with almost all towers down and both nexuses exposed. HKA ended the 32-minute match with a split push after ONE’s decision to go for the epic monster Dark Slayer.

After taking a tight game one, Hong Kong Attitude found their groove and dominated game two, winning in just 13 minutes, with 42,000 gold, eight towers down, and 13 team kills.

The third game was no different as HKA quickly destroyed all nine of ONE’s towers. Han-Li “TheMan” Yu’s Elsu stood out with 100% kill participation.

With all the momentum on their side HKA took game four in just 18 minutes, completing the 4-0 sweep on ONE Team.

For the Semifinals round, HTVC IGP Gaming will take on Team Flash, and Buriram United Esports will take on Hong Kong Attitude.

READ MORE: What you missed at Garena World 2019