Someone put together all 21,540 pages of the One Piece manga, but you can’t read it

Would you buy this piece of art? Eiichiro Oda’s One Piece is one of the longest-running manga series in the world, with over 1,000 chapters and 103 individual volumes as of writing.

French publisher JBE Books paid homage to the mangaka’s (manga artist) most popular work by putting the One Piece manga’s first 102 volumes with more than 21,540 pages into a single volume, making it the largest book in the world.

This One Piece manga sculpture will cost you US$1,800

Marketed as a piece of art, ONEPIECE by Greek cartoonist Ilan Manouach has a thickness that measures 80cm, making it larger than the usual size of a Japanese manga. The book was released as a single volume, wrapped inside a black slipcase. The spine features gorgeous art showcasing the Straw Hat Pirates’ adventures throughout the years.

Each copy sold was numbered and signed by Manouach. Only 50 pieces were released at launch, and they quickly sold out in the blink of an eye despite their bulky size.

The book retails for over US$1,800 and “can be admired as the materialization of an ecosystem saturated by media” as written on the sculpture’s product page.

“ONEPIECE exists only as an object of pure speculation,” according to the official press release. “The profusion of available online content and the rampant digitization of the comics industry, challenges the state-of-the-art of comics craftsmanship. Ilan Manouach’s ONEPIECE proposes to shift the understanding of digital comics from a qualitative examination of the formal possibilities of digital comics to a quantitative reappraisal of ‘comics as Big Data’.” 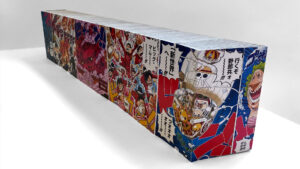 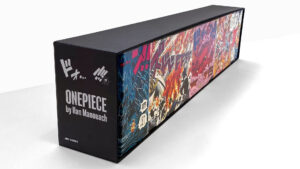 Manouach is known for reinventing influential comics around the world. Some of his projects have been controversial such as Katz, a French version of Art Spiegelman’s Maus, which presented his characters as cats instead of mice. The French publisher of the book, Flammarion, had him destroy all copies under charges of copyright infringement.

When it comes to ONEPIECE, a JBE Books spokesperson believes there is no copyright infringement involved since the piece “is about Manouach’s work around ecosystems of comics, not reading copyrighted content” in an interview with The Guardian.

One Piece follows the adventures of Monkey D. Luffy and his pirate crew, Straw Hat Pirates. To fulfill his dream of becoming the king of pirates, Luffy and his friends scout Grand Line in search of Gol D. Roger’s ultimate treasure, “One Piece”.

The manga was first released in December 1997 and was later followed by an anime adaptation in October 1999. Two decades later, it is one of the longest-running anime series in the world, with 20 seasons and 1,034 episodes to date.

The franchise’s newest movie, One Piece Film Red, is now the highest-grossing film in One Piece history at over US$108.7 million earnings.