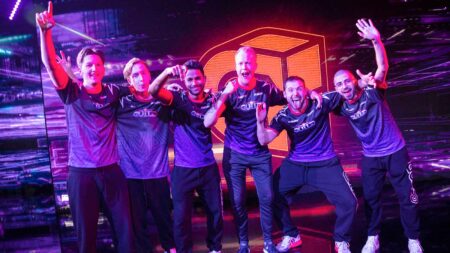 VCT Stage 2 Masters Copenhagen has been filled with surprises. In Group A, EMEA third seed Guild Esports became the first team to advance to the playoffs, beating OpTic Gaming and KRU Esports.

Meanwhile, Brazilian superteam and Masters Reykjavik finalist LOUD suffered an early exit from the tournament, after losing to KRU Esports and OpTic Gaming in the group stage.

OpTic and KRU will now go head-to-head in another elimination match on July 13 to determine which team advances in the tournament.

Over in Group B, DRX defeated Northeption and FunPlus Phoenix to lock in their spot in the playoffs, showing why they are considered the squad with the best teamplay and coordination in the tournament.

Elsewhere, XERXIA Esports have also been eliminated from the competition. Heroics from young star Thanachart “Surf“ Rungapajaratkul were not enough to keep them in the tournament, and the team fell to Japanese representative Northeption.

FunPlus Phoenix will face Northeption on July 13 for the final spot in the playoffs.

Which teams have qualified for the VCT Stage 2 Masters Copenhagen playoffs?

Here’s a look at all eight teams that have secured a spot in the playoffs. Four of these teams received a direct bye, off the back of championship finishes in their respective regional Challengers tournaments.

Teams will now play in a double-elimination bracket starting on July 14.

The winner of the tournament will take home US$200,000 in prize money, the lion’s share of the US$650,000 prize pool. In addition, the champions will receive 1,000 VCT circuit points that will go toward qualification for Valorant Champions Istanbul in September.

All eight playoffs teams are also guaranteed a minimum of US$25,000 and 250 circuit points.

Keep track of all the Valorant action by checking the upcoming schedule for Stage 2 Masters here. All matches will be broadcast on the official Valorant Twitch and YouTube channels.

READ MORE: The way XERXIA Surf plays Chamber is exactly why everyone hates the agent