T1 Korea played together for only four months. 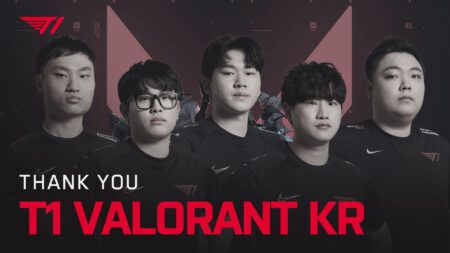 Esports organization T1 has disbanded its Korean Valorant roster. In T1’s official announcement, the organization thanked its players, along with fans, for their support of the T1 Korea team “to the end.”

T1 Korea was one of the eight teams that qualified for First Strike Korea. Unfortunately for the team, they were eliminated on the first day of competition after losing to aNg DarkHorse in the quarterfinals.

Prior to their First Strike exit, T1 Korea had proven themselves to be one of the best teams in the region, with a second-place finish at the A.W EXTREME MASTERS ASIA Invitational, where they battled the best team in Korea, Vision Strikers. The match went down the wire with T1 Korea losing 2-3 in the grand final.

T1 Korea’s dissolution comes soon after Cloud9’s own announcement that it is letting its Valorant roster go right, following Riot Games’ First Strike competitions. Prompted by the Champions Tour set to begin at the start of January next year, there’s a possibility that these moves are to comply with a rule that only allows esports organizations to field one professional Valorant team.

T1 and Cloud9 are two organizations that have North American Valorant rosters, with T1 signing most of the former CS:GO players who were part of the infamous iBUYPower roster. Meanwhile, Cloud9 has its Blue squad which includes NA Valorant star Tyson “TenZ Ngo. Cloud9 also has a third Valorant roster in Cloud9 White, an all-female Valorant roster that participated in the same First Strike qualifier as Cloud9 Blue.