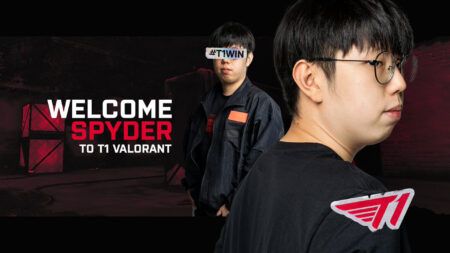 According to T1’s post, Sayaplayer has officially made the switch to Valorant under a new moniker, Spyder. The South Korean Overwatch pro was known for being a terrifying Widowmaker player with exceptional aiming ability.

In late April of this year, Overwatch’s League MVP Jay “Sinatraa” Won made the same switch, where he found immediate success under a surging Sentinels roster that has since won two Ignition Series events. Sinatraa is presently also considered one of the best Valorant players in the world.

As such, Spyder’s move to Valorant continues the ongoing trend of Overwatch pros looking to start a new career with Valorant. However, he will be the only former Overwatch player on T1’s roster, which currently has four of the five former CS:GO pros, who once played under the infamous iBUYPOWER banner.

Spyder’s signing means T1’s Valorant roster is now complete and that they are ready to move forward with Riot’s upcoming First Strike regional qualifiers in North America, which are set to take place later this month.