Is Killuash hinting at a possible return to pro play with Nexplay EVOS? 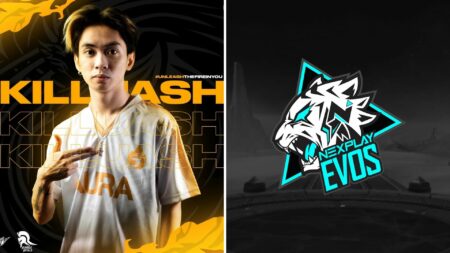 On October 22, Killuash tweeted that he is looking for a team that wants to win a championship. His mentions exploded with speculations on whether the tweet is true, or if he’s just teasing fans.

On October 24, he posted the cryptic tweet “kllshwntstplynxtssn” which translates to “Killuash wants to play next season” once you add in vowels.

Killuash also replied to Zico’s “?” with “g?”, further fueling rumors that he may be gearing up for next season with Nexplay EVOS.

He is known as one of the best Thamuz and Chou players in the region which led to his rise in the Philippine MLBB pro scene.

Unfortunately, Aura PH lost its groove in Season 6 and 7 after failing to secure a championship.

In MPL PH Season 8, Aura PH rebranded to ECHO. Killuash told Manila Bulletin he would not compete, as he felt he needed a break.

Whether he will temporarily play for Nexplay EVOS in MPLI 2021 or become part of the team’s roster main roster in MPL PH Season 9 is still unknown. What we do know is that Killuash is ready to make a splash once again the competitive scene.