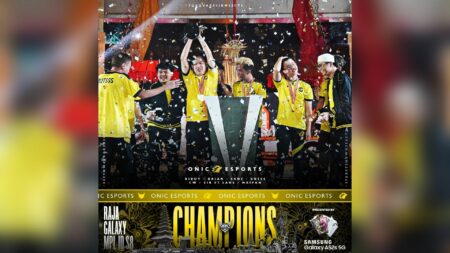 The yellow hedgehog squad has finally done it!

However, RRQ Hoshi took them to the lower bracket after a 3-1 defeat.

In the lower bracket semifinal, they narrowly defeated MPL ID Season 7 defending champions EVOS Legends to qualify for a grand final rematch against the King of Kings.

It was going well for ONIC Esports at first after they secured the first and second game with ease. SANZ even secured a savage with Yi Sun-Shin in the first game.

However, RRQ Hoshi would not go down without a fight. Albert Neilsen “Alberttt” Iskandar led the charge for RRQ Hoshi with his signature Karina and Lancelot picks, which allowed them to force a decider.

In the final game of the series, both teams were at a stalemate up until the 10-minute mark when ONIC Esports wiped off four members of RRQ Hoshi in the bottom lane.

Four members down and the bottom lane wide open, ONIC Esports immediately went for the base to win the thrilling best-of-seven series.

The yellow hedgehog squad have qualified for the M3 World Championship

They have also won the lion’s share of the US$300,000 prize pool, the biggest in all MPL regions.

RRQ Hoshi will have another shot at glory as they have also qualified for the M3 World Championship, their third appearance in Mobile Legends: Bang Bang’s most prestigious tournament.