NXP Midnight on RSG PH: ‘I hope they don’t re-roster next season’

Respect to both teams for giving their all! 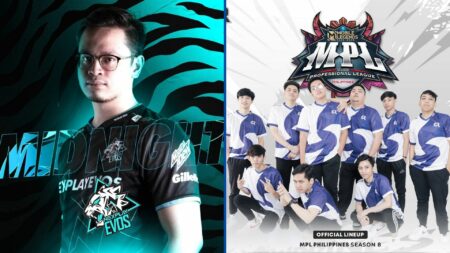 Nexplay EVOS was at an advantage going into the playoffs after defeating RSG PH twice in the regular season.

In the first game, Tristan “Yawi” Cabrera’s Jawhead stepped up with an MVP performance, finishing 0/0/9 in the game, securing the easy win.

It was the rookie Jhonwin “Hesa” Vergara show in game two where he made a solid comeback game using marksman Natan.

RSG PH maintained composure and gave Nexplay EVOS a hard time in game three. However, Nexplay EVOS got the upper hand at the 36-minute mark after eliminating four members of RSG PH.

With only one RSG member remaining, Nexplay EVOS immediately pushed into their base to seal the 3-0 sweep.

In the post-game interview, Midnight had a lot of positive praises about the organization that just entered MPL PH Season 8 with an entirely new lineup.

“I hope they don’t re-roster (next season). I mean they banned good heroes and have a slight statistical advantage,” he said.

“I feel that they will be a lot stronger next season,” said Midnight. “They have a fresh lineup, unlike Nexplay EVOS who has been together a lot longer.”

READ MORE: ONE Esports’ MPLI 2021 will feature 20 of the best MPL teams in Southeast Asia