From a monster to a God. 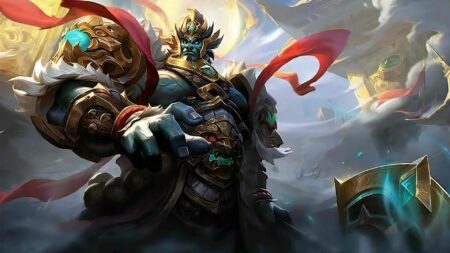 After receiving a massive buff in Mobile Legends patch 1.5.96, Balmond is also getting his own collector skin this August.

God of Mountains Balmond, a skin that was teased in 2018 as an epic skin, is officially coming to Mobile Legends: Bang Bang as a collector skin.

God of Mountains Balmond has bluish-green skin, giving him the appearance of old jade statues that are popular in Asia. He is also wearing a beautifully carved armor and shoulder plate that complements his large stature.

Lastly, he wields a giant axe with what seems to be imbued with green, mystical power. This skin totally makes you feel majestic, as you show off your skills on one of the oldest heroes in the Land of Dawn.

Collector skins provide the best visual skill changes out of all the skin types.

First off, God of Mountains Balmond leaves an orange lightning trail whenever he casts Soul Lock. For Cyclone Sweep, his axe lights up and creates a light show as he spins around.

Last but not the least, his ultimate Lethal Counter summons an intricate carving after he smashes his hammer in the ground.

God of Mountains Balmond will be available in-game soon.