An insane ending to an insane series. 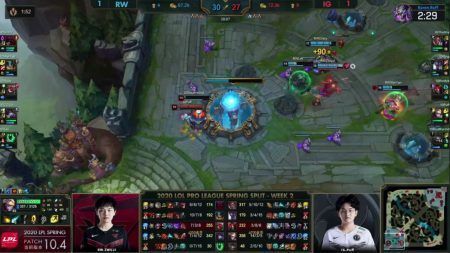 Invictus Gaming’s clash against Rogue Warriors in Week 5 of the LPL featured non-stop action through all three games, with 148 total kills in the series, and an absolutely insane ending.

At the end of game three, iG found a pick onto RW’s Lee “Ruby” Sol-min, and with a minion wave crashing into RW’s base at bot, they took down the last standing inhibitor.

During this push, RW sent their jungler and ADC to quickly take Baron. Even though they managed to get it, iG’s Song “Rookie” Eui-jin jumped into the pit to delay their recalls, which gave iG the numbers advantage and more time to push.

With that, his team managed to destroy the remaining two Nexus turrets. But with low health bars on Su “Southwind” Zhi-Lin and Gao “Ning” Zhen-Ning, the team was forced to retreat.

It was in that split second that iG made the clutch call to use Tahm Kench’s Abyssal Voyage to send their ADC Ding “Puff” Wang into the back of RW’s base.

It took iG’s bot lane less than ten combined auto attacks to down the Nexus for the series win.