Rap queen Soyeon is back! 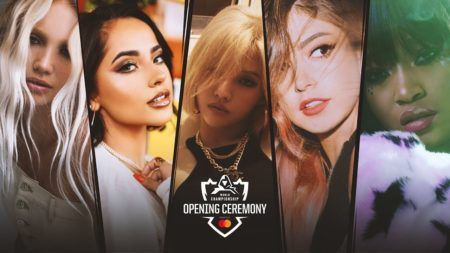 With the League of Legends World Championship 2019 coming to a conclusion this weekend, Riot has prepared an amazing set of performances for the grand finals opening ceremony.

American singer, Valerie Broussard, will be on stage performing the song, “Awaken”, from the cinematic of the same name.

Chrissy Constanza of rock band, Against the Current, and musician, Cailin Russo, will also be singing their song, “Phoenix”, which is the official theme song of Worlds 2019.

The most-anticipated performance will be the debut of LoL’s new virtual group True Damage, comprised of Becky G as Qiyana, Soyeon of (G)I-DLE as Akali, Keke Palmer as Senna, Thutmose as Ekko, and DUCKWRTH as Yasuo. The group will be singing their song “Giants” for the first time.

Worlds is known for delivering epic opening shows, including the appearance of the gigantic Elder Dragon back in 2017 and the sensational Pop/Stars performance by virtual girl group K/DA last 2018.

Summoners can watch the epic conclusion to the ninth season of the professional League of Legends live at Riot Games’ Twitch channel.