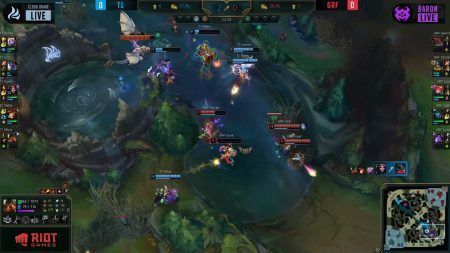 LCK leaders, T1, faced off against Griffin in week 4 of the LCK. Both teams started cautiously with only one total kill at the 23-minute mark.

However, the action exploded when both teams met at the dragon pit.

Griffin tried to disengage but Lee “Effort” Sang-ho perfectly timed a hook on Sword, pulling him back into the melee. From the bush, Faker flanked both Sword and Jeong “Irove” Sang-hyeon with his Distortion skill and claimed both lives in a matter of seconds.

With the rest of T1 closing in on Son “Ucal” Woo-hyeon, Park “Viper” Do-hyeon tried to escape into the mid-lane, but a deep dive from Faker prevented the getaway, and let T1 pick up the ace.

T1 went on to win the game, and also took game two, to complete the sweep.