Ssumday brought the wrath of the Darkin Blade down on Team Liquid. 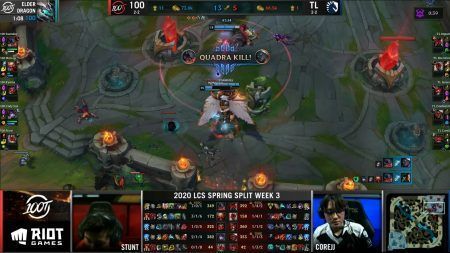 Although 100 Thieves had a rough start in the 2020 LCS Spring Split, the team found success in their recent match against last year’s LCS champions, Team Liquid.

100 Thieves took control of the game very early and kept up the momentum with eleven tower breakdowns, one baron rush, and six dragon kills.

They weren’t finished however as Kim “Ssumday” Chan-ho, still had one big play left in him.

At the 41-minute mark, 100 Thieves entered Liquid’s base for one final push. Team Liquid had a great start to the clash, pushing half of 100 to the base wall.

However, with his teammates slowly losing health, Sssumday decided he would just kill everyone himself, taking down Jo “CoreJJ” Yong-in and then Nicolaj “Jensen” Jensen in quick succession.

Ssumday then locked his sights on the two final members of Liquid, Yiliang “Doublelift” Peng and Jung “Impact” Eon-yeong.

There was no escape for the duo as Ssumday dashed into them, slicing through Impact with a Darkin Blade strike, and then landing an auto-attack on Doublelift to claim the impressive quadra kill.

With the late-game ace, 100 Thieves made their way to the defenseless Nexus and secured their third win in the LCS.