Will Seraphine appear at Worlds with K/DA? 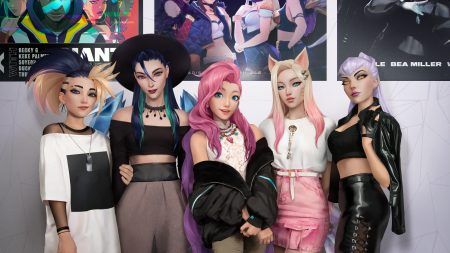 Rumored LoL champion, Seraphine, has been one of the hottest topics of discussion among the LoL community recently.

To add to the speculation, Seraphine has now been spotted in Riot’s new official K/DA comic book series.

Formally known as K/DA: Harmonies, Issue #1 of the comic takes place at a recording studio where all five girls can be seen in action. They might be working on their latest album and upcoming collaboration with Seraphine, as confirmed by the pink-haired songwriter.

The last part of the comic shows Akali and Seraphine taking a break from their work and having a heart-to-heart conversation.

Seraphine may have even given fans a clue about their upcoming collaboration after mentioning Shanghai, China where the League of Legends World Championship (Worlds) will take place this year.

Will K/DA ft. Seraphine take over the Worlds 2020 Opening Ceremony?

Here is a link to the first issue of K/DA: Harmonies.