Rekkles gambles on support Seraphine in a crucial game five

He changed the world! 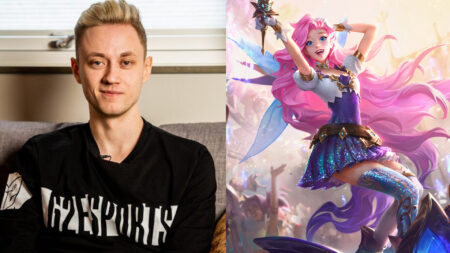 The LEC Spring Split 2021 playoffs started over the weekend, and already league leaders G2 Esports found themselves in an unexpected pinch.

In Round 1 of the upper bracket, G2 were up against fourth place Schalke 04. In game one, G2 trailed early, but managed to claw back in the mid game to take the lead in the series.

Game two was closer, with S04 getting a kill lead in the early game, but G2 managed to secure more dragons, get Baron, and won late game fights on the back of Martin “Rekkles” Larsson’s stunning 16/2/9 Ashe.

One win away from a sweep, G2 drafted a standard team composition, while Schalke 04 surprised by picking Darius to go up against Martin “Wunder” Nordahl Hansen’s Sion. Powering their way through top lane, S04 kept up the momentum, secured all four dragons with the Mountain Dragon Soul to force a game four.

Not done just yet, Schalke 04 banned three AD carries in draft, alongside G2’s two. Recognizing the Rekkles was a key threat, they again went for the unconventional Darius top and this time, Vayne bot. In a drawn out 40 minute game, S04 finally got Baron buff, won a fight, and pushed into G2’s base to even out the series.

In the final Silver Scrapes game, the only AD carry drafted by G2 Esports was, surprisingly, not handed to Rekkles.

Rasmus “Caps” Borregaard Winther held onto Lucian to go up against Azir in mid, while Rekkles remained on the pink haired popstar of the century, Seraphine.

Played in the bot lane as a carry, he took the farm while Mihael “Mikyx” Mehle’s continued in his role as Gragas support.

With all that gold however, instead of going AP, Rekkles went full on support mode with the Moonstaff build and cooldown reduction Lucidity boots. A utility and healing bot, he got first blood of the game, and did his part in team fights.

Teleporting to the tower, Schalke 04 turned the tables on G2. Flashbacks ensued, as Broken Blade pulled a throwback to Worlds 2018 when Invictus Gaming’s Kang “TheShy” Seung-lok decimated the same G2 squad on this very champion.

Scoring an ace, Schalke 04 downed a free Baron, evened up the gold, and felt the momentum. G2 Esports were undaunted however, even as S04 secured a third Cloud Dragon for themselves.

Patiently kiting back, Rekkles showed a different playstyle on Seraphine, supporting his teammates with shields, and found just the right moment to cast Encore.

Despite the back-and-forth, G2 were superior in the late game with their AoE team composition. More than 43 minutes into the game, they pushed with the wave through bot lane, picked off S04 one by one, and destroyed the Nexus.

Disallowing the reverse sweep, G2 Esports clinched the 3-2 victory — without Rekkles playing an AD carry. Displaying flexibility in such a crucial game five, what more bot lane combos will we see from Rekkles and Mikyx?