He can also catch fleeing enemies with his new E. 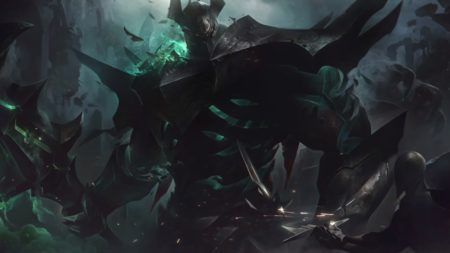 One of the earliest heroes in League of Legends history, Mordekaiser has seen plenty of tweaks over the years, but 2019 will see him finally getting a full rework.

The champion will be getting new visuals, voice lines, and abilities. Riot recently released details about the new ability kit and Mordekaiser looks like he will be a ton of fun to play now.

For starters, his passive, Darkness Rise, will let him deal damage to additional nearby enemies when he hits three spells or attacks on enemy champions, and will boost his movement speed until he’s out of combat. That means he’ll do better at staying in a long fight hitting opponents.

His Q, Obliterate, is an iconic ability that sees him slamming his mace to deal area-of-effect damage or bonus damage to a single enemy. It’s pretty straightforward, and harkens back to his original version.

For the W, Indestructible, Mordekaiser absorbs 25% of damage taken and dealt. He can then cast a shield with this value, and consume 50% of it to recover health. This will give him more staying power in fights, which will let him trigger his passive as well.

Death’s Grasp is his new E, and gives him 25% Magic Penetration and lets him pull enemies towards him. It’s the champion’s biggest change and ensures that enemies can’t kite him like they can now.

Lastly, his ultimate R, Realm of Death, will banish a single enemy champion to the Death Realm for 7 seconds in a weakened state, with Mordekaiser tagging along to engage in a 1v1 duel. If he kills them, he gets to steal some of their stats until they respawn.