LoL’s Qiyana is all about her elemental abilities

The assassin will work best in the river, near a wall, or the brush. 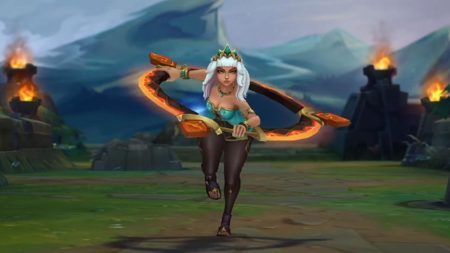 The newest League of Legends champion Qiyana is almost here, and with her arrival comes a new set of abilities for Summoners to master. Here’s a brief overview of her skill set.

Playing as Qiyana means playing with the elements around the map, namely the river, the wall, and the brush.

Qiyana’s first skill can be very tricky, as the effects vary depending on the element used. Edge of Ixtal deals damage by slashing the area in front of Qiyana. If an element is used, she will throw her ring to the target and it will explode.

Audacity, her E ability, deals damage by making a dash.

Her ultimate ability called Supreme Display of Talent creates a shockwave that knocks back enemies. Any element hit by the shockwave will explode and stun opponents for a short period.

Utilizing Terrashape is the key to victory, according to Riot’s BenSandalwoodgrips Chabala.

“Qiyana gets damage, attack speed, and damage buffs while she’s near her chosen element (River/Wall/Brush), and Q – Edge of Ixtal, gains enhanced properties, letting her root enemies, do more damage to low health or stealth,” wrote Sandalwoodgrips in a blog post.

The AD burst assassin will be arriving on the Summoner’s Rift on Patch 9.13.