We’ll see Bdd and the boys again in the LCK Spring Grand Final. 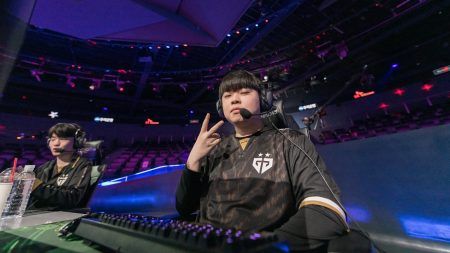 The League of Legends Championship Korea has finally ended its Spring Season with Gen.G leading the league. With a jam-packed eighth week resulting in tied records, the LCK extended another week to finalize the leaderboard.

Though Gen.G and T1 were butting heads for first place throughout the season, wildcard team DragonX stepped up in the final weeks of play to join the league leaders. All three teams ended with the same 14-4 match standings, but Gen.G secured first place with a one-game difference over T1. T1 meanwhile had a 1% match percentage lead over DragonX.

Gen.G gets a bye straight to the LCK Spring finals with their first place finish.

Match of the week: KT Rolster vs T1

KT Rolster pulled off a complete upset over superteam T1 in their final match-up of the Spring season. In game one, KT played to their strengths of map objectives and just general farming against T1’s ability for team fights.

Although KT only had eight kills on the board in contrast to T1’s three, the team boasted a Cloud Soul and a 10K gold lead, slowly closing out the game around the 35-minute mark.

KT entered game two with the same slow and methodical gameplay. T1 may have been catching up on drake and champion kills, but once KT secured two inhibitors, T1 had trouble keeping their base minion-free.

In the final clash, Kim “Aiming” Ha-ram shot through half of T1 and gave his team the ace, completing a rare sweep against one of the best teams in the LCK.

DragonX’s Chovy takes the MVP award in the final weeks for his incredible offensive pressure in the midlane.

Despite facing the agile LeBlanc of Kim “Cover” Joo-eon, Chovy and his Aatrox sliced through two APK members with a pinpoint Infernal Chains/dash-slash combo.