What an earthbending moment! 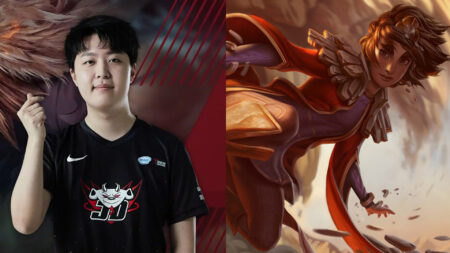 JD Gaming may have already locked their spot for the LPL Spring 2021 playoffs, but as every victory affects seeding, they’re still vying for wins in the last two weeks of the regular season.

In their series against LGD Gaming, JD Gaming completely dominated in game one, which finished in under 27 minutes, 17 kills to three.

Not to be outdone, LGD swung back fighting in game two to maintain a kill and gold lead from early all the way to the late game. Ha “Kramer” Jong-hun’s Tristana was popping off with six kills under his belt, and was the main threat to JDG.

Even though JDG aced LGD 27 minutes into the game and had already claimed the Infernal Dragon Soul, nothing seemed to be going smoothly for either team. Five minutes later, it was LGD’s turn to eliminate four members of JDG, which secured them Elder Dragon.

Seconds before the next Baron spawned, both JDG and LGD hovered around mid lane — except Seo “Kanavi” Jin-hyeok on Taliyah.

Creeping into LGD’s bot side jungle completely out of vision within Fog of War, Kanavi casted Weaver’s Wall, which propelled him all the way into LGD’s base, right next to their open, unprotected Nexus.

Fang “Garvey” Jia-Wei’s Renekton was the nearest for LGD, but it was too late. Kanavi had already dropped a Control Ward, which allowed both Zhang “Zoom” Xing-Ran’s Gnar and Zeng “Yagao” Qi’s Zoe to double teleport and seal the deal.

What a way to end the series! With that, JD Gaming are in fourth place in the standings, while LGD have bowed out of playoffs contention.

READ MORE: Is this the best bush to conceal a ward on Summoner’s Rift?