Just in time for the Halloween month, League of Legends is starting October with three new horrifying skins for Fizz, Amumu, and Elise.

The spider champion Elise looks all ready to go trick or treating in the Summoner’s Rift. Aside from her witch hat, we’re absolutely in love with Bewitching Elise’s bright purple outfit which matches the new look of her spiderlings and the color of her particle effects as well.

Bewitching Elise is the sixth skin in the Bewitching line after Nidalee, Morgana, Tristana, Janna, and Miss Fortune.

Meanwhile, Amumu looks sad and lonely for Halloween night, playing with a swarm of bats and a group of jack-o-lanterns all by himself. He is called the Pumpkin Prince, after all.

Little Devil Fizz completes LoL’s 2020 Harrowing skins. The blue creature’s skin has been transformed into a fiery red shade. He still carries his iconic trident but summons one huge Little Devil Teemo instead of his shark companion for his ultimate ability.

Fans are also seeing the debut of Kassadin as the 19th champion to join the Hextech skin line.

Meanwhile, the Morning Star Crew just got bigger with five new skins announced for the Odyssey skin line. We’re seeing Kha’Zix, Aatrox, Sivir, Twisted Fate, and Karma onboard the Odyssey universe. What role will these five play in the galactic setting? 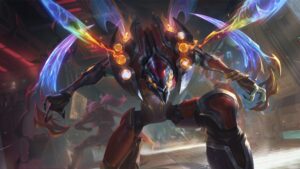 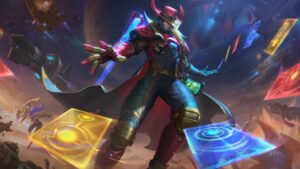