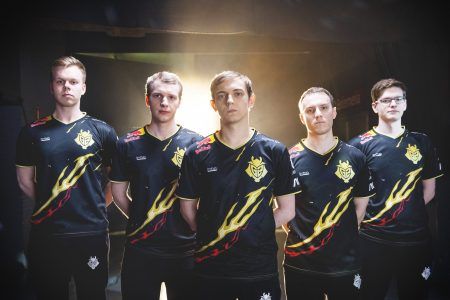 Coming from the lower bracket, G2 proved to be the better team almost immediately, winning early team fights in game one that eventually snowballed into an insurmountable lead.

G2 controlled the flow of the first match with their off-meta picks with Rasmus “Caps” Winther on Kog’Maw and Mihael “Mikyx” Mehle on Lulu.

Fnatic tried to win the early game by getting aggressive in team fights, but G2 was able to turn the situation around with a quick response from Marcin “Jankos” Jankowski’s Jarvan IV. Martin “Wunder” Hansen’s Gragas followed up with a Flash and Body Slam combo for a double enemy knockup leading to a double kill for Caps.

After taking down the Baron Nashor and soaking in its buff, G2 finished the game and took down four of Fnatic’s members. The match lasted 27 minutes and ended with a 16/6/48 KDA from G2 Esports.

Game two played out in a similar fashion with Fnatic unable to get going at all.

12 minutes in, after an initial clash left Fnatic’s Martin “Rekkles” Larsson and Zdravets Iliev “Hylissang” Galabov low on life, the rest of Fnatic came to assist them. However, this ended in disaster as G2’s Luka “Perkz” Perković quickly flanked them and picked up a double kill on Rekkles and Oskar “Selfmade” Boderek.

Fnatic found themselves defenseless with G2’s intense pushing power, as G2 ended the game with a huge ace.

G2 completed game two in just 24 minutes, with Perkz finishing the game with a perfect 4/0/9 KDA.

Despite going for a more competitive draft in the third match, Fnatic’s positioning mistakes and overextensions cost them their chance for a comeback.

Late in the game, Fnatic’s Gabriël “Bwipo” Rau’s attempted to prevent G2 from taking down Baron Nashor. As his Zac was channeling his third ability Elastic Slingshot, Mikyx’s Janna cast Howling Gale to stop him.

Things went downhill for Fnatic from this point as two more of their members got taken down.

G2 jungler, Marcin “Jankos” Jankowski was awarded the Most Valuable Player of the Spring Split.

This is G2’s seventh LEC title. The team has now secured a Main Event seed to the Mid-Season Invitational.

READ MORE: 2020 LCK Spring Playoffs: Everything you need to know