The aggressive ADC shows us what LCS greatness truly looks like. 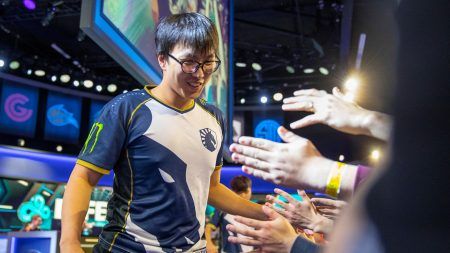 Although Yiliang “Doublelift” Peng is expected to rejoin TSM after an underwheming Spring Split stint with Team Liquid, the superstar ADC helped turn Liquid into a championship-tier team.

Let’s take a look at five of Doublelift’s best moments with the Ride or Die crew.

5. Doublelift kites half of Cloud9 with some frosty arrows

Liquid faced league leaders Cloud9 in their final bout for playoff contention in the 2020 Spring Split. TL eventually took an inevitable loss, but the team fought their hardest until the final second.

After C9 claimed the Cloud Drake, Nicolaj “Jensen” Jensen knocked up Philippe “Vulcan” Laflamme with the Forge God and easily claimed their first kill of the clash. The rest of C9 locked TL down with some incredible crowd control, picking up three kills on their side.

Despite having the odds stacked against his team, Doublelift demonstrated his championship mettle by continuously kiting his way through the crossfire for a hard-earned triple-kill in the end.

Nothing says championship material more than singlehandedly taking out one of the best ADCs in the region. In this highlight, Doublelift caught Zachary “Sneaky” Scuderi in a quick duel after his teleport. Although Sneaky was able to reach the turret for safety, Doublelift popped his heal for some instant movement speed and chased the Ezreal player for the last hit and a confirmed kill.

3. Team Liquid gets the clean ace against TSM

Doublelift played up quite the rivalry with former squad TSM in his first year with Team Liquid.

In this memorable moment, TSM started the final clash with an Enchanted Crystal Arrow that landed right on Chae “Piglet” Gwang-jin. With Kevin “Hauntzer” Yarnell following up with a Depth Charge on the TL midlaner, Piglet did his best to retreat with a sliver of health left.

While Doublelift secured Piglet in the backline against Hauntzer, Kim “Reignover” Yeu-jin quickly chopped down TSM’s backline for a double-kill. To complete the clean ace, Doublelift chased down Vincent “Biofrost” Wang and executed him with a pin-point mystic shot.

2. Doublelift dives into Flash Wolves for a triple-kill

While Team Liquid only placed fifth in the 2018 Mid-Season Invitational, Doublelift and the crew had some stellar group stage matches.

In their match against Flash Wolves, Liquid ended the game with an amazing clash in the bot lane. With Su “Hanabi” Chia-Hsiang losing a ton of health from Doublelift’s aggressive poking, FW started to make their way back into the base. Lu “Betty” Yu-Hung was able to snipe two of Team Liquid, but in exchange, Doublelift deleted Hanabi, activated his Killer Instinct for a shield, and proceeded to claim two more lives for the triple-kill.

1. Doublelift gets a quadra-kill on DAMWON Gaming

Doublelift and Team Liquid’s runs at the Worlds may not have been the best example of their skill, but the team had an outstanding beginning to their Worlds 2019 run.

Going up against Korea’s DAMWON Gaming, TL did an amazing fake-out at Baron to catch the LCK team on the wrong foot. Even with Jake “Xmithie” Puchero checking out early from the fight, Doublelift immediately re-established their offense with an amazing Killer Instinct into DAMWON.

With Doublelift picking up three kills in the clash, the star ADC went straight for the retreating Jang “Nuguri” Ha-gwon. Despite some incredible damage and evasion from the DWG mage, Doublelift easily eliminated Nuguri for the quadra-kill and the game-winning ace.