Nuguri and his Ornn catch four of KT Rolster in a stampede! 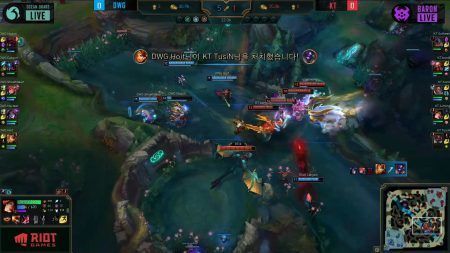 DAMWON Gaming (DWG) may not be a household name in the League of Legends pro scene yet, but the team is steadily becoming a dominant force in the LoL Challengers Korea (LCK) tournament.

In DWG’s match against KT Rolster, Jang “Nuguri” Ha-gwon charged toward the enemy team to halt their dragon rush. Butting heads with Park “TusiN” Jong-ik, Nuguri started to lose health from KT’s instant barrage of skills and auto-attacks. But with the rest of DWG pushing the offense, TusiN was taken out by Leona’s Solar Flare.

Seeing this opportunity, Heo “Showmaker” Su instantly deleted Kim “BonO” Gi-beom as he came down from the knock-up.

As Nuguri and a few others were taking down Kim “SoHwan” Jun-yeong, Sin “Nuclear” Jeong-hyeon closed in on Lee “Kuro” Seo-haeng. Nuclear propelled himself with a blast cone, then popped his heal skill for a bit more movement speed before shooting down the Lucian with a simple auto-attack.

DWG went on to win the match against KT Rolster with a 2-0 standing, putting themselves in fifth place of the leaderboard. KT Rolster is currently the lowest-ranked team in the LCK with a 0-5 record.