The Belgian was a true all-star to the last day. 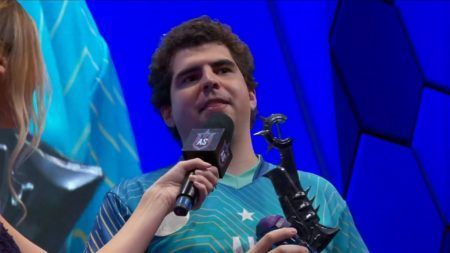 In a stunning turn of events, Gabriel “Bwipo” Rau claimed three wins on the last day of the 2019 League of Legends All-Star Event. The Belgian Fnatic player was able to get a match win in Ultra-Rapid-Fire portion and first place in both Teamfight Tactics Littles and 1v1 tournaments.

Bwipo ran an amazing team composition of five shadow units and two mystics. The Fnatic player stayed on top until the very end, with a solid 60HP to spare. It came down to him and Zachary “Sneaky” Scuderi who ran a broad bronze comp in the final rounds.

With an impressive three-star Kindred with Seraph’s Embrace, Bwipo wiped out Scuderi halfway through the sixth level, earning himself first place in the TFT Littles tournament.

With some back-up this time around, Bwipo and team URF Blue had an amazing lead in their show match. Even with an ace on their side, URF Blue agreed to stall the push for one more clash inside team Red’s base.

With the full Red team respawning, Kirill “AHaHaCiK” Skvortsov went in a bit too early, facing another death in the hands of URF Blue, the four-man Red team did their best to defeat Bwipo and his teammates, but their minions ultimately closed out the game with a win.

As the final, solo event of the night, Bwipo went against two-time 1v1 champion Jian “Uzi” Zi-Hao. Although Uzi had Bwipo pinned at his tower with his Varus, Bwipo took a game-changing risk and dove into Uzi and his minions.

As he initiated his ult, Bwipo had less health than Uzi, but after he culled, his Renekton gained the health advantage. With just a few more hits, Bwipo would clear the wave and kill Uzi for the last win of the night.