100 Thieves rob Dignitas of both the Baron and the game

They’re called 100 Thieves for a reason. 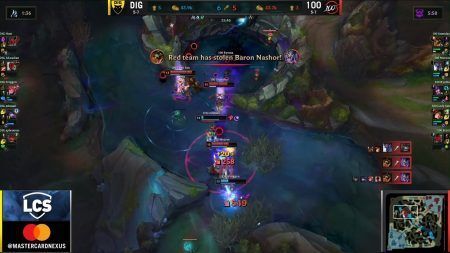 In 100 Thieves match against Dignitas in Week 7 of the LCS, 100 Thieves found themselves trailing in kills, gold, and dragons, 25 minutes into the game.

That all changed however when they pulled off an amazing play in the Baron pit.

With the Baron already down to half-life and only two of 100 Thieves around, Dignitas was pretty much set for victory if 100 Thieves didn’t interfere.

However, Sun “Cody Sun” Li-Yu and William “Stunt” Chen were ready to engage. With a quick Make It Rain from Cody Sun and an anchor hook from Stunt, Dignitas had to divide their attention between 100 Thieves and the Baron.

As the rest of 100 Thieves arrived, Stunt tanked all the damage to disperse Dignitas.

The remaining Dignitas players did their best to secure the Baron, but Kim “Ssumday” Chan-ho took him down first with a quick slash.

With the Baron now on their side, William “Meteos” Hartman flanked the last Dignitas players, chomping through Zaqueri “aphromoo” Black and Johnson “Johnsun” Nguyen.

With the impressive outplay, 100 Thieves gained their sixth win in the League of Legends Championship Series 2020 Spring Split.