Undefeated on their home turf. 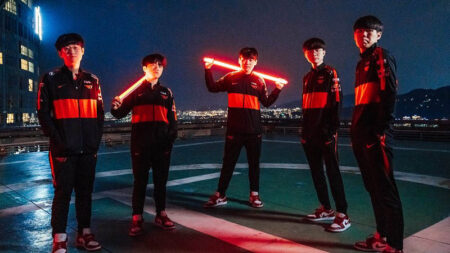 Day 6 of the League of Legends Mid-Season Invitational (MSI 2022) saw incredible performances from LCK representative T1. Holding a 3-0 record from the first Group Stage round robin, the LCK team continued their win streak with three more victories, securing the top spot in Group A.

Their MSI Group Stage record is just another display of the team’s current dominance in LoL esports. Prior to MSI, T1 had a perfect 18-0 record in the LCK 2022 Spring, and were crowned LCK 2022 Spring champions with only one game loss in their playoffs run.

At the 13-minute mark, the mid laner teamed up with Ryu “Keria” Min-seok‘s Bard to take down Lee “Yaharong” Chan-ju’s Syndra. Keria entered the mid lane with Magical Journey and got close enough to exhaust Yaharong.

Keria then locked the Syndra player down with Tempered Fate’s stasis, buying enough time for Faker to set up Zoe’s Paddle Star. As soon as Yaharong came out of stasis, Faker landed Paddle Star into a Sleepy Trouble Bubble, and an auto-attack. Faker then finished him off with one last Paddle Star to secure the kill.

Faker and the squad ended the night by contesting Baron against Saigon Buffalo Esports.

While the Vietnam representative was looking to chip down T1’s 7,000 gold lead by secretly killing Baron, Faker’s Sylas caught them red-handed with a stolen Destiny ultimate, and teleported to the top side enemy jungle.

With SGB’s jungler now dead, the rest of T1 cornered the enemy squad into the pit. Lee “Gumayusi” Min-hyeong’s Kalista used Fate’s Call on jungler Moon “Oner” Hyeon-joon’s Wukong to place him in the fray and secure Baron with Smite.

Still standing tall with a five-man squad, T1 stormed the enemy base through the bot lane to claim the Nexus and their final win of the MSI Group Stage.

With an undefeated 6-0 record in Group A, the LCK representative advances to the MSI Rumble Stage, where they’ll face other top performing teams like RNG and G2 Esports.

The MSI Rumble Stage starts on May 20. Watch the MSI 2022 matches live on Riot Games’ official channels on Twitch and YouTube.