He’s supposed to be a demon mage, after all. 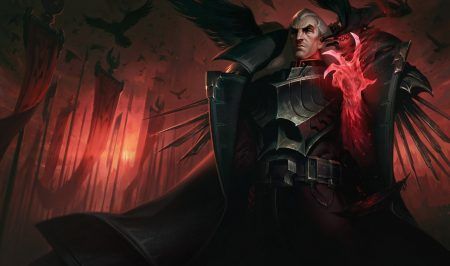 Since the Swain rework went live on PBE on April 13, his now (in)famous infinite ultimate has been the highlight across popular League of Legends YouTube channels.

Swain’s R, Demonic Ascension, still has a cooldown, but is now fueled by a new secondary resource, Demon Power. Activating his ultimate grants Swain 50 Demon Power, which decreases over time.

Players can replenish it by draining enemy champions within range, which grants him 20 Demon Power per second, so as long as Swain is sucking the life out of at least one enemy champion, his ultimate will continue to run.

The community initially thought that the Swain rework was overpowered and broken, since no other champion in the game has a permanent ult. However, since patch 12.8 went live, Riot Games actually buffed Swain in a hotfix, increasing his base armor and move speed because “he’s a bit on the weaker side”, said associate game designer Tim Jiang.

Together with lead game designer Bryan Salvatore and game designer Ezra Lynn, the trio joined LCS shoutcaster and content creator David “Phreak” Turley in his patch 12.8 rundown to explain their decisions behind the Swain rework.

Before patch 12.8, Swain was mainly played in the support role because the meta in mid lane is dominated by long range control mages who establish early game priority though wave clear.

The previous Nevermove (E) was enough to make him a viable crowd control support, for combined with Death’s Hand (Q), the combo had enough base damage to burst squishy AD carries in the laning phase. He’s also able to gather extra information with W, which is useful as support.

The changes in this patch, especially the removal of the pull back damage from E, hurts support Swain, whose win rate in solo queue has already dropped to 45.88% according to U.GG.

Shifting his power to mid and possibly top lane, Riot Games’ intention is for Swain to “strike fear in his solo lane enemies’ hearts” by reviving his fantasy “as a master strategist and dark, demonic diplomat”, the game developers wrote in the patch notes.

A key aspect they focused on in this Swain rework was his ultimate, because “this is why people play this character”, said Tim. The ability’s previous design ran on a timer: once cast, opponents would disengage until it went on cooldown, then reengage and kill him after.

“We don’t want to punish players who fulfill the fantasy of their character. That’s where we got the infinite R,” Tim continued. “We really wanted to create this moment where you press R, the enemies go ‘Oh shit!’. If I don’t get away from this Swain, he’s going to drain the life from me and I’m going to die.”

This is where his ultimate’s damage and slowing extension mechanic, Demonflare, comes into play, for it gives Swain players the choice to decide the right moment in a fight to reign opponents in. It was also added to compensate for his preferred bruiser AP item build path comprising Rylai’s Crystal Scepter and Demonic Embrace, which do not provide much Ability Haste.

Now that you understand the reasons behind the Swain rework, are you excited to try him out on patch 12.8?

READ MORE: There is no coming back from Poppy’s ultimate anymore in patch 12.8